Tell Me the Story of Chhat Puja 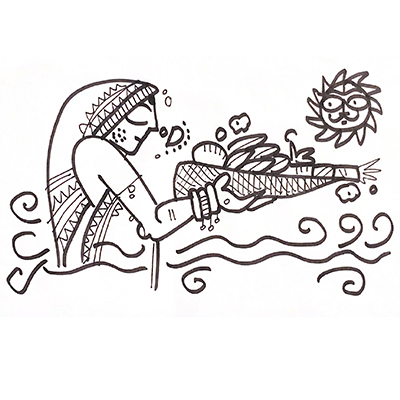 Many people asked me what is the significance of Chhat puja. They want to know a story, for example, there is a story of Ram’s return to Ayodhya on Diwali, and Lakshmi entering the house on Diwali. So there must be a story associated with Chhat Puja.

Yes, we can tell stories that this is related to the Sun, to goddess Sasthi who protects mothers, or the six Krittika stars who raised Kartikeya, that this is a festival performed by Sri Rama and Sita after the return from 14 years of exile, and by Draupadi and the Pandavas, in order to restore their fortune after they lost everything in the gambling match. Stories about kings performing these rituals in order to get children. But these stories came later. Before stories there was the ritual. The doing was more important than the story. In the oldest religions, the practice (karma kanda) is more important than the intellectual reason (gyan kanda). There may be emotion (bhakti) linked to action (kriya), but the latter is most important.

Diwali for example is about lighting lamps. Why? Some say because Ram returned to Ayodhya. Some say to show Lakshmi the path to enter our house. And others says to help our ancestors return to Pitr-loka after they pay visit to us during Pitr-Paksha before Navaratri. No one story is accepted by all. But everyone agrees, the festival is about lights.

Likewise Chhat Puja is primarily performed by housewives, the matriarch of the household. In Bihar and parts of Nepal, the larger Magadhi region, the women fast for many days, stay awake all night waiting for the sun to rise, make offerings on baskets, special baskets containing all kinds of fruits, vegetables and flowers. Special significance is attached to the sugarcane, to coconuts. If one tries to analyse the ritual, one realises this has something to do with fertility and growth, and prosperity and the health of the household where the woman plays a central role. There is no role of the Brahmin.

Occasionally, a katha may be told, a katha of how ritual when performed solved the problems of people and how those who did not perform this ritual faced many problems. Connections with Ramayana and Mahabharat seem superfluous, supplementary information, not critical.

The ritual has to do more with the body and family, and less with the mind, or soul. It’s Tantrik we can say, Tantra being about the body (tanu). The sun is important here, water is important here. The earth is important here as women approach the river by continuously lying on the ground, making their body one with the earth. Prayers are offered facing the sun, half immersed in the water. It indicates a connection with nature, with flora and fauna. An awareness of the body, a heightened sensation created by fasting and staying awake all night.

These are some of the oldest ritual practices in India. We may want to classify it as Vedic or tantric. But these are women’s festivals which may have been performed in India for thousands of years, perhaps long before Vedic culture crossed the Gandak river.

These were old practices related to life and reflect Hinduism in its most primal form, and must be respected as such without the need to explain them using Vedic or Puranic framework that were created by men.