Tea is for us what Soma was for Vedic Aryans 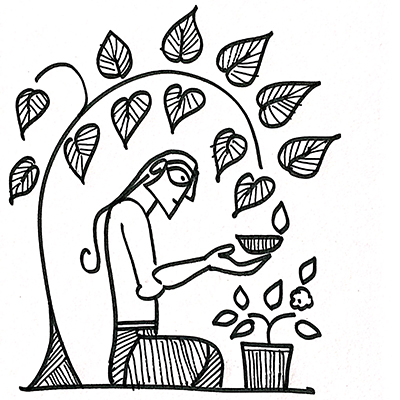 Who is a Hindu? Tea is for us what Soma was for Vedic Aryans

The Rig Veda has about 1,000 hymns composed as groups of Indo-Aryans migrated in waves from the Indus river valley to the Gangetic river valley over 500 years between 1,500 BCE to 1,000 BCE. These hymns are organised in the Gangetic plains by the Kurus into ten chapters known as mandalas. The ninth mandala compiles over a hundred hymns focusing on Soma, an herb, which is given the status of a deity.

Every day the Vedic Aryans would crush the Soma herb, filter its juice and mix it with milk and honey and then offer it to Indra, three times a day — in the morning, the afternoon and the evening. Soma was Indra’s favourite drink. It made him alert, energetic, aware, took away sloth, filled him with radiance and positivity, in exchange for which he granted success to those who invoked him thus.

Soma was clearly consumed by those who offered the drink to Indra. It gave them inspiration, positive energy, took away laziness, energised them and motivated them to action. In many ways, it was like our habit of drinking tea. Like Soma, tea wakes us in the morning and afternoon. We drink tea to energise us, to awaken us, and to inspire us. Tea is for us what Soma was for Vedic Aryans.

Most people assume that the Vedic Soma is something magical and mystical. For a long time, people thought Soma was mind-altering, a drink that was consumed by shamans to get into a transcendental state and discover things. Many romanticised the idea of the Vedas and Vedic mantras. The connection of Soma with mushrooms, or with hallucinogenic and narcotic substances like cannabis, emerged in the 1960s and 1970s during the hippie period.

A careful reading of the hymns, however, reveals many characteristics of this herb. It grows in mountainous areas. It is a leafless, tubular, cane-like plant that is sweet smelling. The juice is astringent. The colour is redgold. Similarly descriptive hymns are found in the Zoroastrian scripture that are composed in Persia – the Yasht and the Yasnas of the Avesta. They refer to a drink called Homa.

In the Rig Veda itself, Soma is something that is not really contemporary. It is associated with the past, with ancestors. Soma hymns clearly belongs to an earlier period, when the Indo Aryans were entering the subcontinent from Kazakhistan via Afganistan and Pakistan to India. They left the mountainous Somagrowing areas and came to India. They clearly consumed Soma during the early period of migration. They retained memory of it with fondness and valued the energy it bestowed on them, and on Indra.

The Shatapatha Brahmana, which was composed in 800 BCE, in the Gangetic plain, states that by this time some substitute was offered as Soma. Soma was already in short supply. It was not available in the Gangetic plains of the Indian subcontinent and had to be imported from the north-western mountains, which was heartland of Vedic world in 1500 BCE, 700 years earlier.

In the 17th and 18th centuries, many Parsi priests who lived in Gujarat would buy a particular herb from the Afghan region. This herb, even today is called Huma, which is equivalent to the sound of Soma, in the Iranian dialect. If we see this plant, it resembles description of the Soma plant. This pant is the Ephedra. Leafless, sweet smelling stalky bush; it contains ephedrine, which acts like a shot of adrenaline, energising us, arousing us, exciting us and awakening us. High doses of the same cause restlessness, anxiety, nausea and vomiting and therefore must be avoided, symptoms the Vedic hymns warn against.

Clearly, this was Soma that was taken by Indra before war. Indra, of the Rig Veda, is an assertive deity. Whenever he lacked the morale or was exhausted, he would drink Soma to awaken and recharge himself and to fight on, just like a good cup of tea. This is what Soma is in the simplest possible way. Soma is such a popular drink that in the ninth chapter of the Rig Veda we find numerous metaphors to describe its release from the plant stalks while crushing, its movement through the filter and its mixing with milk. Soma is compared to the sun rising up the mountains, to a bull in search of his cows and to the arrival of a king. Clearly Vedic Aryans in the Gangetic plains were filled with nostalgia for this herb that in Puranic times came to be linked to the moon that causes the juices of all plants to ebb and flow with its waning and waxing.