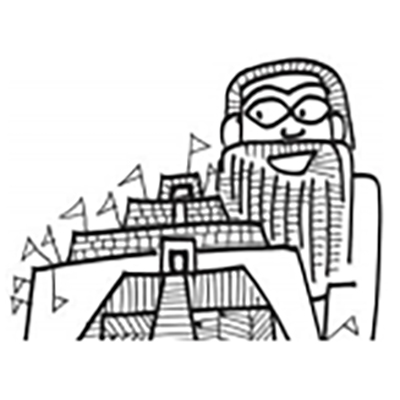 Ancient Greeks, like ancient Hindus, valued the idea of city-states and decentralised power. But exposure to Middle East introduced monotheism, the idea of empire, with central control, allegedly for deficient governance. This journey of history is reflected in mythology as polytheism moves towards monotheism.

Nearly 6,000 years ago, city-states developed in the land now called Iraq, between the rivers Tigris and Euphrates. These were farmlands overseen by the city in the centre. The centre had a tower known as Ziggurat. On top of the tower, resided a local deity. Every city had its own deity and was managed by the priests who served the deity. The priests secured their power from the deity and were the first kings, with the right to impose tax – either in the form of grain or service. This is how writing began, primarily for accounting and tax collecting. Many cities meant many gods. When the cities fought, the gods fought. When the cities made peace, the gods married. When the city was destroyed, the old gods bowed to the invading gods. Thus Sumerian mythology emerged, their gods telling stories of the cities.

Then Sargon of Akkad changed the rules of the game, 4,000 years ago. He took tributes from the city-states and then left them alone. He wanted to be the great king and his city to be the dominant god. For this, the tributes he received were enough. After Sargon rose Hammurabi in Babylon, who put down the code of law, for the diverse tribes of his land. This was the first Constitution, inspiring even the Biblical Commandments. All this happened roughly around the time Harappan cities collapsed and before the Indo-Aryans entered India.

Roughly 3,000 years ago, the Assyrian empire had a different thought process. The Akkadians left the local administration to the local kings, with nominal central control. The Assyrians increased centralisation. They had an extremely aggressive military policy, complete with war machines. They conquered lands and conquered population would be relocated to other lands. This did not allow rebellion. The talented people of the cities would be transported to other parts of the empire to serve the central city of Nineveh. There was no autonomy given to the city-states. Everyone served the god, Ashur, and the Assyrian kings. They were identified as the stewards of Ashur. So, we see a general trend towards monotheism and the rise of a central empire. An empire that tried to establish homogeneity across the land.

This changed dramatically with the arrival of the Persian empire, in 500 BC with Cyrus the Great. He too believed in conquest and governance. However, he allowed local autonomy, religious freedom and diversity. He relocated people to their original land, reversing the old Assyrian policies. The Jews were pulled out of Judea and sent to Babylon. Cyrus allowed the Jews to go back to their homeland, and build their temple. With Cyrus, we see the policy of religious tolerance despite the birth of royal monotheism. The private belief of Zoroastrianism is that there is only one god called Ahura Mazda. His representative on earth was the king. The king had to do good for the people to establish the reign of Ahura Mazda. Here, the empire started taking an ethical form, along with monotheism, even though junior gods were allowed to thrive.

In the Sumerian period, we have the concept of Anunnaki – 7 elder gods or the old gods. In Zoroastrian mythology, we have the 7 arch angels or the Amesha Spentas serving the single god. Thus, we see a change in mythic structure happening. The city-states changed from being just tribute payers to serving the central city to autonomous, diverse units. It’s the journey from the Akkadian to the Assyrian to the Persian empire.

We are seeing this in India today. The old system was the Raja-mandala, autonomous but inter-dependent kingdoms. Then came Raja-dhi-raja, the emperor, who took tributes from neighbours. The idea of a central state collecting taxes directly came from ancient Persia, and imposed to a limit by the Mauryan and Gupta empires, but it was easier to have indirect taxes via local kings who gave tribute to the central king. The idea of central tax collector was encouraged by Delhi Sultans and then Mughals, and then East India Company who still allowed a large number of princely states to thrive. But after Independence, we see increasingly a shift towards Delhi control, where all taxes are collected by centre to be redistributed to states, which marks the end of ancient Raja-mandala concept, ironically by those who claim to protect Hindu culture.