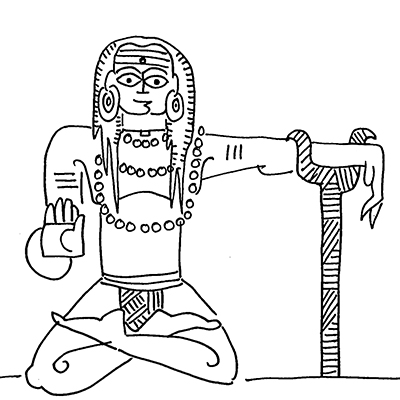 There is much in common between the Chinese path of Taoism and the Indian path of Tantra. Both value the body and the material world. Both see all power coming from nature. They seek the balance of forces. What is yin in China, is called ida in Tantra, and deals with the feminine, cooling, fluid, dark force. This is balanced by yang, which is pingala in Sanskrit, and deals with the masculine, warming, solid, bright force. The Taoist symbol is circular reminding us of Tantrik chakras and mandalas.

No one is sure who influenced whom, but we know that from the 2nd century to the 8th Century, from the Gupta period to the time of Harshvardhan, many Chinese monks travelled to India to study in Buddhist universities such as Nalanda in Bihar. Writings of these Chinese monks refer to the gradual decline of Buddhism in India, and the rise of untouchability as a practice. And in the period that follows, we see the growth of Tantrik literature in both Hinduism and Buddhism, in the eastern part of India (Bihar, Bengal and Odisha), where the body is seen as an instrument to acquire occult powers.

In ancient China, great value was placed on the idea of immortality. In Taoist mythology, we hear of the eight immortals, exceptional humans, who are allowed to eat the peaches of immortality that grow in the Jade Heaven. These special fruits are carefully guarded by the Jade Emperor, and selectively shared. A Chinese novel written in the 16th Century, but based on older Chinese tales, tells the story of a Buddhist monk, Tripitaka, who travelled to India during the Tang period. He was accompanied by a powerful monkey, Sun Wukong, who was born from the elements and so, had many Taoist powers. He was so strong that he managed to erase his name from the Book of the Dead, and even eat the peaches of immortality.

The first emperor Qin Shi Huang lived at the same time as Ashoka. He sent out generals around the world seeking the ‘elixir of life’ and even drank mercury to make himself immortal. Finally, when he died, he had left strict instructions of how he was to be buried so that he could be resurrected at a future date, when the elixirs had been found. Thousands of terracotta images of soldiers, some on horse-drawn chariots, were made to guard his tomb.

We can speculate that this information reached India, and probably Indian doctors were taken to China to help him in his quest for immortality. This is because even ancient Indian medicine, Ayurveda, was taught by a god called Dhanvantari, who emerged from the ocean of milk carrying the pot of amrita, the nectar of immortality. There is no proof of this, of course. But it is clear that the idea of immortal beings became a part of Indian folklore from around 10th Century CE, despite the dominant motifs of impermanence favoured by Buddhism, Jainism and Hinduism in earlier times. For various reasons, mortal characters from various Hindu mythology become immortal and become renowned as cheeranjivi such as Markandeya, Bali, Vibhishana, Hanuman, Parashuram, Kripi and Ashwatthama. And tales emerge of Nath-Siddha-Jogis who have conquered death such as Gorakhnath and like Taoist monks can fly through the air and defeat demons. This could not be a coincidence and points to cultural exchange.