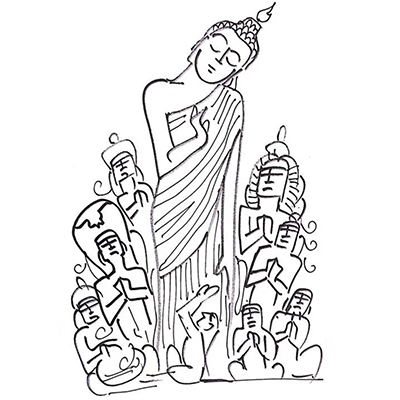 Buddha taught the sacred lore (dhamma) that would end all suffering. Many of his students renounced society and became monks (bhikku) and nuns (bhikkuni) of his sacred order (sangha). They travelled everywhere spreading Buddhist ideas. The people they encountered had their own gods—friendly or dangerous spirits who lived in rivers, rocks, ponds, trees, animals, and in cemeteries. These were the devas, asuras, rakshasa, yaksha, apsaras, naga, preta, and pisachas.

In Buddhist literature, we find tales of how Buddhist monks interacted with these beings and eventually converted them to the Buddhist way. These were never seen as false gods as in Christianity or Islam. They were just seen as junior or inferior gods, superior to humans, but trapped in the wheel of suffering and rebirths (samsara), seeking freedom (nirvana).

In Buddhist literature, we find stories of how monks who did not follow the monastic rules and did not behave with dignity were tortured by these spirit-deities. Monks who were serene and calm and followed the Buddhist way, could face spirits bravely, drive them away, calm them down, and even get them to help communities. Thus, we find many Buddhist artworks showing rakshasa (fierce beings), yakshas (corpulent beings), nagas (serpent beings) and pretas (scary emaciated beings) around the Buddha, adoring him, serving him as doorkeepers and attendants, defending his stupas and viharas.

In fact, in early days, Buddha himself was worshipped as a tree-spirit yaksha.

Such art reveals how Buddhism was never hostile to the native beliefs of people. And how eventually, these native deities became subservient to the Buddha and appropriated into the wider Buddhist lore. In Sri Lanka’s ancient chronicles, we hear how the Buddha arrived to calm down the wild rakshasas and yakshas, who once inhabited the island. In contemporary Tibet, Bon gods have become part of Vajrayana Buddhist mythology, assisting Buddhist monks and Buddhist followers, making trouble if not respected.

Buddhism spread across China from around second century via the Silk Road. The people there worshipped many Taoist gods and venerated ancestor spirits. Over time, people believed that if they provided food to Buddhist monks and built monasteries for them, they would reduce the suffering of dead ancestors, or ghosts. Those who did not treat Buddhist monks well were doomed to become hungry unhappy ghosts, with miserable rebirths.

When Buddhism travelled to Burma around 10th century, people there worshipped special spirits known as ‘nat’ similar to ‘bhuta’ worshipped by Tulus of India. These ‘nut’ were spirits linked to health, wealth, fertility and luck. These ‘nat’ were seen as living in special heavens, above the human world, adoring the Buddha, as they gradually made their way towards enlightenment.

In Hindu Puranas, this ability of Buddha to calm down powerful malevolent spirit-gods, and make them followers, was seen as ‘trickery’. Brahmins said that Vishnu took the form of the Buddha in order to trick asuras so that they gave up Vedic rites and could be easily defeated by devas. It reveals the ancient rivalry between Brahmins and Buddhists for patronage.