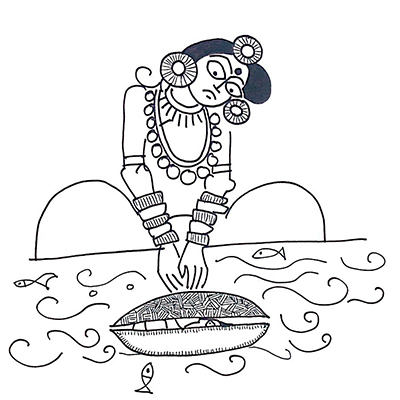 However, the word Mandodari has other etymologies. One being a bad womb. This meaning was given because her womb was destined to give birth to a child who caused the death of her husband, Ravana.

Another derivation is from the word, Manduka, which means a frog. It is said that the goddess Parvati turned a female frog into the likeness of herself, so that Ravana could marry this woman. The story goes that Ravana once wanted to marry Shiva’s wife and Shiva gave him permission. Shiva, being simple, did not understand the concept of marriage, wife, or fidelity. But Parvati got annoyed with Ravana’s audacity and created a frog-woman to teach the arrogant Rakshasa-king a lesson. Parvati is supposed to have cursed Ravana that this woman would bear a female child who would be the cause of his death. Mandodari’s daughter was therefore cast into the sea and then she was caught by the Earth. She emerged from the Earth to Raja Janak. This is one of the folk beliefs on the origins of Sita.

In many folk Ramayanas, it is believed that Mandodari is a nymph. She is some kind of a celestial creature. She is given by the Rakshasa called Maya, and Lanka is part of her dowry. She’s the mother of Meghanadha, Atikaya and Akshay Kumar. In some stories, she is the one who warns Ravana of how he can be cursed by abused women who do not give their consent to come to his bed. In other stories, it is she who tries to persuade Sita to accept Ravana as a husband for the sake of peace. In still others, it is she who tries to stop Ravana from abusing Sita who is Ram’s wife. Thus, she is portrayed as virtuous in some stories and complicit in others.

In the Kashmiri Ramayana, when Mandodari sees Sita, milk starts to overflow from her breast. She then realizes Sita is her birth daughter. In the Bengali Ramayana, it is she who returns Sita to Ram after Ravana’s death. But she also curses Ram that just as she had been widowed by Ram, Ram would experience separation after marriage.

In the Assamese Ranaka Charitra, Ravana creates a false Ram and Lakshman who try to force Sita to marry Ravana. In the same way Hanuman takes the form of a bee and enters Mandodari’s quarters and turns into a cat. She tries to feed him. He scratches her breasts, steals her necklace, throws it up in front of Ravana. Hanuman then tells him to check Mandodari’s breasts for proof that she has been with another man. In fury, she blames Ravana that this was only possible because he misbehaved with another woman. Hence a male stranger could touch her body even though she is as pure as Sita and even she can do the Agni Pariksha like all chaste wives.

Thus, in Mandodari we see a complex story of a woman with a complex relationship with a demon-king.