Tales Of Gods, Politics Of Kings 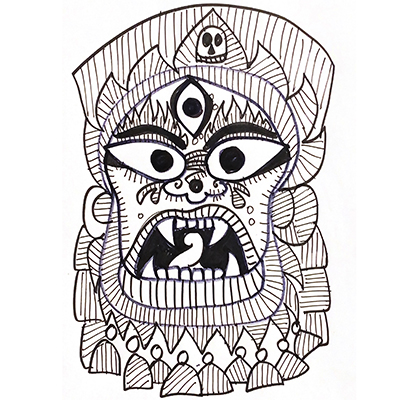 If one goes to Kerala, one hears of “tharavad”. These were ancestral homes, where large joint families lived together. They controlled large tracts of land. A similar system is found in faraway Nepal. Here, instead of the word “tharavad”, the word “guthi” is used. This is a joint family which lives together in a neighborhood and owns common land. There are hundreds of guthis across Nepal, just as there are hundreds of tharavads across Kerala, indicating a continuity of culture. Even in Goa, we hear of community villages, before the system was disrupted by the arrival of the Portuguese. Kerala, Nepal and Goa are the frontier regions of India where there was minimal or no influence of foreign political systems. When we study them, we understand India’s past better. The knowledge of the past is usually embedded in stories of local deities.

In Nepal, every guthi neighbourhood has a central courtyard. Here, a deity is worshipped. This deity could be Hindu, Buddhist, or Pre-Buddhist, Pre- Hindu, or maybe a Tantric deity. Sometimes, it could be a simple deity called Ajima or the grandmother. She is represented by a cleft in a rock or a hole in the wall, a metaphor for the goddess’s womb.

In the old days, the guthi family were peasant landlords. They owned and controlled the land and perhaps in earlier ages, even tilled the land. As the cultivation increased, they started hiring people to work on the land. This created the division between the landlord and landless labour. But, in the early ages, these lands were controlled, tilled and harvested by the same people who lived in these communities. Some communities became very powerful. These communities were represented by an impersonal entity called the goddess. Generations came and went, but the courtyard and its goddess survived, making her the eternal mother of the neighbourhood. This was true across India.

So when we talk about many gods in Kerala, or Goa, and Nepal, we are really referring to a form of social organisation. The many gods and goddesses represent the many communities in that land. Some are Kuladevas, representing the lineage of communities. Some are Gramadevas which are more geographical. Kuladeva indicates connection by blood and Gramadeva indicates connection by land. The same kula may exist in other villages. A village has many kulas. In a village festival, the constituent kula-devata comes together, like the many gods who came together to create the goddess Durga. We find this during the Kulu-Manali Dassera festivals where various devatas from various neighbouring hills come in their palanquins to meet the old goddess Hidimba and also the god of the royal family, Raghunathji. The Gosani Jatra of Odisha witnesses goddesses of the neighbourhood gathering to pay respects to the central deity of the land, Jagannatha.

Over time, some of the communities dominate other communities in the village and so their gods become more powerful, with grand temples and elaborate ceremonies that overshadow other deities. This is why in the major cities of Nepal, such as Bhaktapur, Patan, Kathmandu we find congregations of goddesses, like the Seven Sisters, or the Nine Durgas or the Eight Mothers. If one looks at the rituals in Nepal, one finds how these goddesses engage with each other. The rituals are either competitive or collaborative.

The fertile Nepal Valley, known as Nepal Mandala, was home to the Newars. Over time, it was infiltrated by warriors from the surrounding mountains and plains. The Kirata and Licchavi kings brought in patriarchy. This is why we find the goddesses being associated with Bhairava, a Tantrik deity, or Indra, a Vedic deity. There are rituals where the goddess gives the sword to Indra or to the Bhairava. Her symbol is replaced by the symbols of the male gods. This indicated an exchange of power, in a ritualistic format.

The goddess, Taleju, arrived with the Malla kings. She became the goddess of the royal family. She joined the previous goddesses of the land, but played a dominant role. In some stories, the old goddess Nara Devis’ daughter, Kumari, is asked to kill her lover who is attacking the land. These folklores capture the history and political turmoil of the Nepal valley. The Shah kings, who came from the mountains in the 18th Century, did not add to the number of goddesses. Instead, they said that all the goddesses were manifestations of their Kuladevi Kali. This is why the Shah kings played a key role in the unification of Nepal. They merged the many guthis into a single polity.

In the 19th century, a commander of the Shah army built three temples in Kathmandu. One was Jwala Mukhi, another was Kamakhya, and the third was Dakshin Kali. While these temples look tantric, they align with the architecture and ritual format of Nepal. What is interesting is that these goddesses are not of Nepal. They hail from the Himachal, Assam, and Bengal regions. Through the building of these temples, the local commanders were establishing the concept of a greater Nepal. This idea stretched Nepal’s region from Himachal in the West to Assam in the East. It is very like the concept of Akhanda Bharat used today to explain the concept of a greater India.

Thus, when we approach mythology, we must be aware of the practices related to the negotiation between the economic and political power of different communities. Within these practices are captured various ideas. Ritual performances and processions through festivals and fairs depict a social order. In our inability to understand these negotiations, we forget their role in establishing social order.