Superstition and the inherent cruelty of rationalists 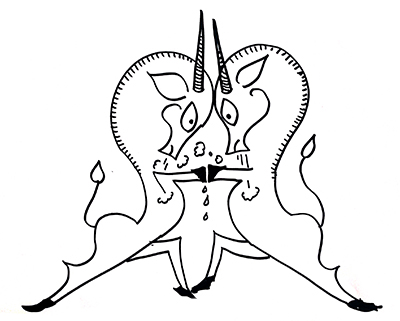 I refer to this because in the 19th century, when the European imperial powers introduced the word “religion” to Japan, and sought religious freedom, it led to a threefold division that separated national ideology (Shinto) from religion (Buddhism, and Christianity), and religion from superstition (shamanic practices). Following the Meiji Revolution, as Japan sought to be more secular and modern, it meant defining “religion” — a term imported from Europe and primarily designed to explain Christianity.

To be secular and modern, religion was permitted only in the private space and was generally seen as irrational and non-scientific. The Japanese intellectuals of the time very cleverly separated religion from state ideology (Shinto), which they saw as essentially scientific and rational.

They also separated religion from superstition, which was seen as un-scientific and irrational. What separated the two? Religion was institutionalised, urban, patriarchal, textual and intellectual and spoke of “one god” or “one truth” — superstition was folk, rural, dominated by female shamans, non-textual, non-intellectual, and spoke of multiple spirits and demons and gods.

In many ways, this tripartite division is something that has plagued India since independence.

There is the national ideology (Nehruvian secularism, and current moves towards Modi Hindutva), both of which claim to be scientific and rational, with the former distancing itself from Indian tradition, especially if it is Hindu, and the latter affirming a particular notion of Hinduism rather chauvinistically. Then there is religion, which we have to keep private, and then there is superstition, against which we want to pass laws.

The more you think about it, the more you realize that categorisation is power. Nehruvian secularism wanted Hinduism to be put in the box of religion, and keep it private, and essentially declare it a “belief”, hence irrational and unscientific and patriarchal and needing reform, cleansing of all things “superstitious”.

Currently there is a counter-move, with an attempt to pass of some aspects of Hinduism not as religious, but as scientific and rational and so belonging to nation-state ideology. Hence the obsession with convincing everyone that dharma and yoga are scientific ideas, much like Shinto was, before Shinto was rejected after the Japanese defeat in World War II.

Congress politicians and many in the radical Left want to convince us that the BJP is proto-fascist, yet when a member of the Nehru-Gandhi family dies, especially former Prime Ministers, it is important to cremate their body in full public view, accompanied by chanting of Vedic mantras, so that the electorate does not doubt the Hindu roots of the Gandhi family. Thus, private religion is made very public to feed the realpolitik of the nation-state.

No one considers the ritual — including the Hindu funeral practice of breaking the skull of the deceased as the body is being engulfed by flames — superstitious. No one calls for it be banned. No one considers an electric crematorium. And it is important to build a “samadhi”, a practice once restricted to Hindu monks who are buried, not cremated, followed by the Mughal practice of building tombs to the dead to ensure immortality. Is this rational? Was tomb-worship rational?

We confuse the rational with rationalisation.

Humans can rationalise everything, especially if we have Indian lawyers and judges, and especially if we want to favour the rich and the famous. We locate ideology above religion and religion above superstition. Thus we create a hierarchy.

We want to believe that human existence is possible through rationality and science alone. We convince ourselves that we are rational beings with irrational emotions, when the truth is we are emotional beings who need rationality to control the world and cope with it.

Currently, rationalists are being mourned. At another literature festival, people were made to stand in silence for two minutes to show respect to the dead. And I wondered: what would happen if I sat down or talked on my phone? Would people treat me the same way in which theatre audiences treated a Muslim family in a Mumbai movie theatre for not standing up to the National Anthem or the remember those who died in 26/11? Would rationalists support my “choice” of not mourning for their murder? Or would I be “compelled” to show respect in a “ritual manner” decided by the literature festival organisers, whose directors were accused of not adequately respecting the protest labelled “Award Wapsi”?

Are rituals — funerals, standing during national anthem, mourning by maintaining two minutes of silence — rational, emotional, religious, scientific, traditional, or superstitious? The problem comes down to categorisation, and valuation of categories. Hence, always a subject of argument.

Many rationalists often declare their rationality by mocking superstitions (at the very least) and religion (if brave enough).

A mythologist seeks to understand, not endorse or judge, the subjective truths that govern rationality, secularism, religion and superstition. He or she recognises that rationality, secularism, religion, and superstition are parts of the same continuum called culture. These are means to organise the world and control the unpredictability of nature and emotions.

While controlling fire, water, earth, plants and animals is easy, controlling human emotions, especially fear, is not. Our imagination amplifies our fear. And our fear is made worse by the imaginations of those around us. We cannot handle the ecosystem of the fear we live in. And so we create rules and rituals that we impose on people around us.

Thus we domesticate the world around us — turn the forest into the field. We “cultivate” the world so that they it does not “threaten” us. We drive away all that frightens us. And so we create the single god who will not tolerate false gods, we reject idolaters, and heretics, and fools who follow irrational beliefs and superstitions.

We cling to these ideas and convince ourselves all alternate ideas are flawed. We seek to control the future (like books to be published) through irrational rituals (not talking about it) to reduce our sense of helplessness as we are storm-tossed by nature and culture. We want people to blame or thank for the random shocks and surprises of our lives.

Can we call them terrorists, revolutionaries, Brahmins, women, men, rapists, monks, homosexuals, Jews, Ku Klux Klan, savages, blacks — anything that justifies their demonisation and allows us to destroy them and take control of our lives? Or shall we call them victims whom we have to save through our rules, rituals and revolutions? We need to control the “other” to feel safe. That other, for the rationalist — the keeper of the only acceptable truth in secular society — is superstition.

Categorisation often lacks compassion. It is about creating boundaries. It is about not recognising the fears of the other that makes them do silly things, fears that we ourselves experience, silly things that we ourselves do. In our fear, we become cruel, and in cruelty we embrace rationality and reject empathy. We seek laws that will wipe out human exploitation. They have creating such laws since the first human tribe created the first taboo. It took away someone’s fear. But not forever.

Should we then do nothing? Should we stay complacent? These are common arguments against “Hindoo” philosophies by the let-us-save-the-world lobby. As the Gita says, and I paraphrase: whether you revolt, or don’t revolt, do, or don’t do, fight, or don’t fight, you make a choice, one that indulges your imagination of yourself, and makes you feel safe. And like all choices, that choice will have many consequences, most of which are not in your control. As the Prime Ministers of Japan and India are coming to realise, Ganga aartis notwithstanding.