Suleiman and the djinns 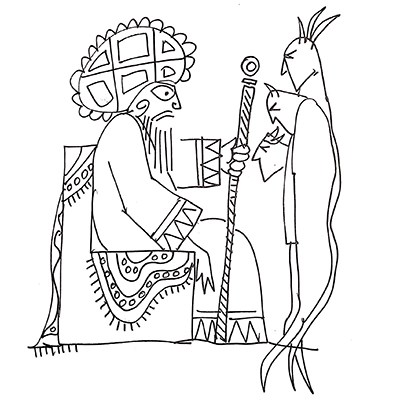 The right-wing communities around the world have one common feature: they believe there is only one truth and that truth is theirs. Therefore, they have a problem with other mythologies and science. This is true as much of Hindu/Christian/atheist radicals as it is of Islamic radicals. This stems from the assumption that mythology has something to do with falsehood (a 19th-century colonial definition), rather than cultural truths (a 21st-century postmodern definition).

A key figure in Islamic mythology popular across the Middle East is King Suleiman (Solomon of Old Testament). Suleiman was the third king of Israel and the son of Dawood (David). He was known as a wise king and the builder of the temple, where the arc of the covenant was housed. No matter how rich and powerful and famous he became, he never forgot to pray to Allah.

Allah gave Suleiman the power to understand the language of animals. He never understood why Allah had given him this gift until one day, when his army was marching, he heard ants talking of his approaching armies and learned of their fear of getting crushed by his battalions. Suleiman then directed his army on to such a path that the colony of ants was not harmed, thanking Allah for making him hear what no human could, and enabling him not to hurt innocent creatures accidentally.

Suleiman was also known as the great magician, who had full control over the djinns. Djinns are considered to be malevolent and benevolent spirits that were invoked in pre-Islamic mythologies. Allah, say the keepers of folklore, created djinns out of fire, angels out of light, and humans out of clay. God decreed that all must bow to the first human, Adam. Most angels agreed and so were given a place in heaven. A few refused, the leader of them being Iblis; they were the shaitans. Shaitans include Satan as well as demons. The djinns refused to bow to Adam, because they were convinced they were greater, because they had knowledge of the unseen and the future, in other words, mysticism and fortune-telling.

To teach them a lesson, Allah gave Suleiman complete control over them. Using spells, Suleiman could make them do his bidding. He could make them fly with his army and overpower his enemies. Thus, Suleiman was able to conquer vast lands and build fabulous palaces and structures in his lifetime. Even in later periods, when a magnificent temple was encountered by Muslim warlords in other countries (which they did not break down), it was admired and considered to be the work of Suleiman’s djinns.

Suleiman died while he sat on his throne. His corpse remained there, erect, holding his staff and nobody realised he was dead. Days later, when termites broke his royal staff, the dead body tumbled off the throne. Only then did the djinns admitted to themselves that they never had the power to see the unseen or the future. Otherwise, would they have not known that Suleiman was dead? Would they have not stopped following his orders? Humbled, they prayed to Allah, who alone knows what is unseen and in the future. im with you