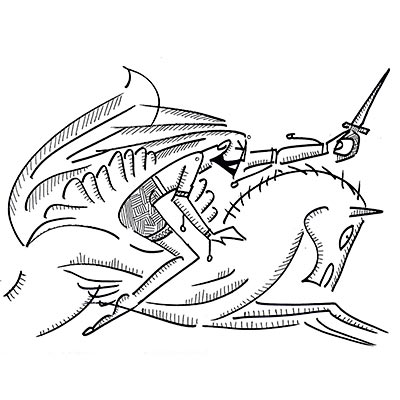 Kalki is the tenth and final form of Vishnu. He is described as riding a white horse, sword in hand. His story appears in Vishnu Purana around the time when Huna warlords overran the north of India somewhere in the latter part of the reign of the Gupta kings. It was elaborated over the next thousand years culminating in the Kalki Purana written about 500 years ago. He is often described as the avatar who is yet to come, after the Buddha. This makes him some kind of a messianic figure, a savior, who will push back the barbarians and bring back peace and prosperity to the world.

However, this does not align well with Indian philosophy, which is based on change and rebirth. Yes, Vishnu does descend on earth from time-to-time, as Krishna says in Bhagavad Gita, but not to save the world, or to get rid of villains, as is popularly believed, or even to establish justice, but to reinforce the idea of dharma. And dharma is about human potential, the human ability to help the helpless, provide resources for the meek, an idea reinforced in the first avatar of Vishnu, the fish avatar, or matsya avatar, when Vishnu takes the shape of a small fish and asks Manu, father of humanity, to save him from the big fish.

So why does Vishnu, who speaks of compassion in his first avatar, take the form of a destroyer in his final avatar? And is it the final avatar? How can there be something ‘final’ in a world that is described as eternal and timeless?

For that we have to understand the concept of kalpa: the lifespan of the world. Like humans, the world has a birth, a childhood, a youth, an old age and finally death. So does an idea. So does an organization. Nothing is static, everything is changing. Change demands growth in one’s lifetime. Change also demands death of an old idea. Change can also demand the expansion of the mind to include a new idea.

Every world or idea or organisation goes through phases. First it is fresh and new, arousing excitement. This is the krita-yuga, the childhood innocence. Then comes the time, when it keeps its promise. When all is well. When hopes are high. This is treta-yuga, when Ram rules, when rules are valued. Then comes the period of decay, when survival is at stake, when the idea struggles to survive. This is dvapar-yuga, when hopes fades, when Krishna is needed for rules are no longer valued. Then comes kali-yuga, a time to withdraw from the old idea like Buddha and await the invader, Kalki, who brings new ideas. In this world view, the outsider is celebrated. He helps the insider thrive, prosper and grow by bringing in new ideas, new resources, new processes and ways of thinking.

Kalki needs to be seen differently, not as a messiah or a savior who restores us back to the old way, but as one who brings in new ideas. And the clue lies in the horse he rides. Horses do not thrive in the Indian subcontinent and have to be continuously imported from Arabia and Central Asia via the North West frontier. The only place they thrived was in Rajputana. The value placed on the horse in Vedic literature, and in votive offerings to brave heroes across the subcontinent, indicates the value placed on these ‘imports’. For these represent fresh ideas that help in regeneration of the old.

Often organizations grow complacent with homegrown knowledge. Fat builds up. The body becomes weak and inelastic, full of self-created bureaucratic hurdles that stop it from responding to market realities. It becomes sluggish and starts losing in the market, unable to fight back, becoming prey rather than predator. To shake it up, the invader is needed – a new leader from another industry, a horde of consultants, maybe even a new investor who insists on a role in the management, any outsider who is hungry and can take advantage of the market vacuum. His arrival is violent and frightening. Shakes away the complacency, forces us to revitalize our mind and body, get rid of the fat if we have to survive. He can either invoke a competitive side in us, to fight back, or the collaborative side in us, to work together. Thus the world or idea or organization transforms. The outsider, the invader, is thus seen in a positive light, not as a destroyer of the old, but one who provokes regeneration, who helps in creating the new by reframing the old.