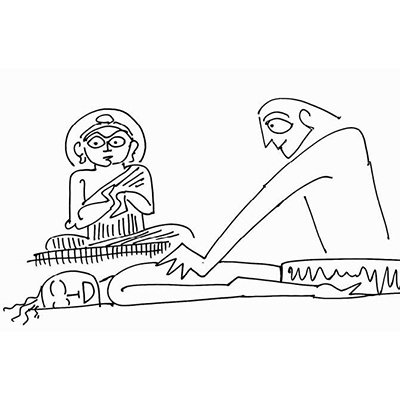 Have you ever wondered how Buddha became a spa icon? How it has even a bar in its name? Two thousand and five hundred years ago, there was a prince who lived an extremely luxurious life and then realised that everything around him, all things beautiful, and all things wonderful, will one day come to an end through disease, old age, decay. They will finally face death.

And so, he left the luxuries of his palace, the responsibilities of a king, of a husband, of a father and went to the forest and meditated, discovered the secret of life, the truth of the universe which he called ‘Dhamma’ and shared with the world. He became to be known as the enlightened or awakened one, the Buddha.

But, today when you think of Buddha, he has become a spa icon. You can go to any health spa for a massage, a steam or a jacuzzi and there in front of you, you will find an image of Buddha. If you go to a bar, it is quite possible the table on which you keep your alcohol has a Buddha image next to it. Images from Thailand, Cambodia, Burma, Sri Lanka, India and Japan are now proliferating in every bar and spa. In fact, you cannot have a spa without a Buddhist icon with soft music playing and Buddhist iconography.

Is this cultural appropriation? Mindless postmodern remixing? We can say this happened as the West became increasingly exposed to Buddhism in the earlier part of the 20th century, and Buddhism became an alternative to Christianity for many spiritual people in the West, who were tired of the overly religious control of the church.

In capitalist America, in order to sell the idea of eastern mysticism to the west, people tried to use all commercial and capitalistic tools. Buddhism became less about awareness of the world and more about relaxation and relieving oneself of stress and so all stress relieving activities came to be associated with Buddha.

Buddha takes away stress, Buddha makes you peaceful, without bringing any transformation in your world-view and therefore, Buddha came to be associated with massage practices, with the indulgent luxurious lifestyle of the rich and famous in a spa. That blind Buddhist monks offer massage services as therapy in Buddhist temples of Southeast Asia seems to justify this practice in the eyes of many.

Perhaps this is the result of secularism and the scientific temper and market centric view of life where nothing is sacred, and everything is free to be violated, except private property. This is why sacred icons of the world are corrupted in the West, where form is separated from the idea.