Sita Is Not Helen 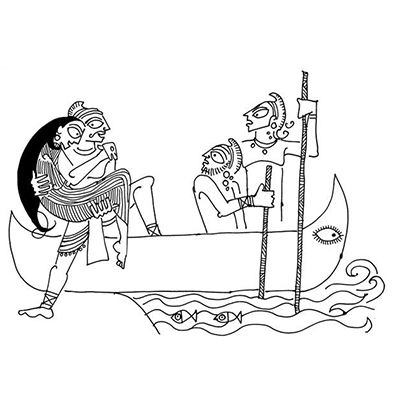 Many people are of the opinion that Greek and Hindu mythologies have much in common. This idea was first proposed by Europeans who believed that all pre-Christian cultures were pagan and so, had a common theme. So, they saw the devas of Hindu mythology as the Olympians of Greek mythology. They argued that the asuras were the same as the Giants or the Titans, against whom the Olympians fought.

Linguists who studied Indo-European themes, like the separation of the earth and sky, argued that Vedas reveal the common root of Greek and Hindu cultures. This idea was popular in colonial times. In Hesiod’s Theogony, the Earth goddess, Gaia, is separated from the sky, Uranus, by Cronus. Then, Cronus castrated his father, Uranus. A similar idea exists in the Vedas, where the god of the sky and Prithvi, the god of the earth, are separated by Indra. The Indophile Alain Danielou linked the Greek god, Apollo, who is the god of organisation and order, with Vishnu. And he linked the Greek god of madness and chaos, Dionysus, with Shiva. Chaos/Order is not same as Withdrawal/Engagement, hence equating Dionysus/Apollo with Shiva/Vishnu, simply because Shiva likes narcotics like Dionysus, and his ganas are wild like Greek satyrs, seems rather presumptuous.

Zeus, the god of the sky, thunder and lightning, who rode an eagle, was equated with Indra, who also wields thunder and lightning. But, the eagle was associated with later Puranic Vishnu. Scholars argue that Vishnu is seen as the younger brother of Indra in Vedas. But in Vedas, both gods ride horse-drawn chariots, and in Puranas where Vishnu rides an eagle, Indra rides an elephant.

Wendy Doniger wrote, “The Shadow Sita and the Phantom Helen” where she argued that Helen’s replica was sent to Troy, in the same way that Sita’s shadow was sent to Lanka. Peter Frankopan in “The Silk Roads” argued that Sita who was “abducted” is similar to Helen who “eloped” by her own consent. Both are clear cases of force-fitting where abduction is confused with elopement and women’s consent is not considered in the argument.

Such similarities between Greek and Hindu myths are superficial. At the heart of the matter is the fact that Greek mythology is based on one life. You live only once and at the end of it, you are judged by three judges when you die. These judges decide whether you will go to the realm of the common folk (Asphodel), the realm of heroes (Elysium) or suffer the wrath of the gods in a hell (Tartarus). This idea of judgement is missing in Hindu mythology.

Hindu mythology is based on rebirth and all of people’s actions are documented by an accountant. Yes, you can go to hell (Naraka) for misdeeds, and enjoy heaven (Swarga) for good deeds, but these are temporary. You always return, or you have the option to break free and go to the land from where rebirth is not possible (Vaikuntha or Kailasa). What controls your life is karma, a concept alien to Greek philosophy, though some Greek philosophers did try to introduce it in Greece under the theme of “metempsychosis”. Some cosmetic exchange did happen when the Greeks came to India in the wake of Alexander, but the two cultures continued to imagine their worlds very differently.