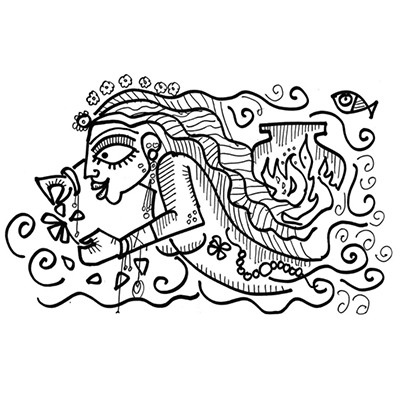 In the 16th Century, Shah Abdul Latif Bhittai wrote a set of love poems in Sindhi to express Sufi mysticism, metaphorically capturing the tension between love and law, head and heart. Each has a female protagonist, hailing from Northwest India, from Gujarat to Punjab, and from different social strata.

Marvi is a peasant who is abducted by an aristocrat called Omar. He imprisons her for many days in his fortress, but she insists on marrying the man she is engaged to in her village. So, he lets her go, but the villagers accuse her of infidelity (as in Ramayana?) and she is asked to go through a trial by fire. Omar argues that even he should be put through trial to prove he never violated her consent.

Momal is a courtesan who prefers the king’s minister, Rano, over the king. The jealous king returns to his palace across the desert with Rano. Rano works the whole day for the king, but at night returns to be with his beloved. On learning this, the king gives more and more work to Rano, until one day he is so late that Momal thinks he will not come. Longing for him, she gets one of her maids to dress up in his clothes and sleep beside her. Rano, who arrives very late, sees Momal in bed with another “man” and turns around. Depending on which version one reads, they either reconcile or their love remains unfulfilled.

Sassui is a washerwoman who falls in love with a prince called Punnhun, but the prince’s brothers take him back to his kingdom. Sassui, unable to bear the separation, walks through the desert, shouting his name, but dies midway. The earth splits open and buries her. The prince also cannot live without her and walks through the desert to meet her. On the way, he hears of Sassui’s death. He is unable to carry on and dies, too. Once again, the earth splits open to accept his body as well.

Noori is a fisherwoman who marries a king who has many wives. The jealous wives tell the king that Noori still meets a fisherman from the village every night. The king spies on her to learn the truth. He gets to know that the fisherman comes to give her a fish, which she likes to eat, but does not get in the palace. Realising how humble and honest Noori is, the king makes her his chief queen.