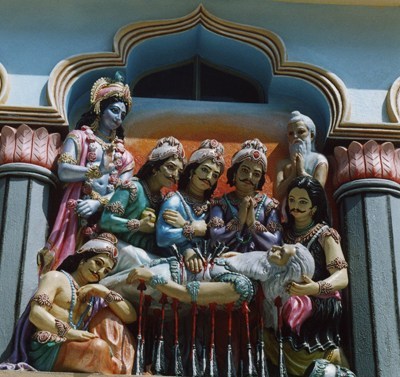 The arrival of a sage called Narada in Hindu mythology always spells trouble. He would share very innocent information, or ask a very simple question, and provoke all kinds of base emotions from jealousy to rage to insecurity.

Once he went to the house of Kansa, dictator of Mathura, who knew that the eighth son of his sister would be his killer. Kansa would have killed his sister had his brother-in-law, Vasudev, not promised to handover the eighth child to Kansa. “Do you trust Vasudev?” asked Narada, “I mean, he may handover another child and claim he is the eighth; or he may handover his own child, say the seventh, and claim he is the eighth.” Having sowed the seeds of doubt, Narada walked away plucking his lute and chanting, “Narayana, Narayana.” Influenced by these words, Kansa killed each and every child his sister bore to ensure his safety.

Another time, Narada went to the house of the five Pandava brothers who had a common wife called Draupadi, and told them the story of a nymph called Tilotamma. “Two demon brothers, Sunda and Upasunda, fell in love with her and wanted to marry her. She said she would marry the stronger of the two.  So the two brothers fought to prove their strength. Since both were equally matched, they killed each other. Wonder which of you five is the strongest?” Hearing this the five Pandava brothers quickly put down rules that would govern the sharing of a wife; she would be with one brother exclusively for a year and return to him after spending four years with the other four brothers.

In Kansa’s case, Narada’s intervention leads to serial infanticide. In the Pandavas’ case, Narada’s intervention secures domestic bliss. Yet, at no point is Narada feared or shunned by any king or god. In fact his arrival is welcomed. His intervention is seen as something inherently good — though the goodness is not immediately apparent. In Kansa’s case, Kansa sees him as a well wisher. But by his intervention, Narada ensures that Vasudev, rather than handing over the prophesized eighth child as he initially planned to, takes the child to a safe house where he can grow up and return to kill the wicked king.

Narada though a mischief-maker and quarrel-monger, has good of people at heart.

But there are advisors whose intentions are otherwise. The most famous one of these is Manthara who poisons the ear of Kaikeyi, in the epic Ramayana, and influences the queen to demand the exile of Ram. By following Manthara’s advice, Kaikeyi destroys the household.

So who is the advisor who sits beside the king: Narada or Manthara? If Narada, how does he see the king — as Kansa or as a Pandava? These are difficult questions for a leader to answer. For the Naradas of today’s world do not come with a lute and Mantharas of today’s world are not bent and ugly.

Jagruti is amongst the first women in her company to become the unit head of an entire zone. It is a powerful and enviable position and she knows that there are many people who would like her to fail. As she took over office, she found many people willing to be her friend and confidant. There is Nitin, an accountant who has worked in the zone for over 20 years. A mild-manned man, Nitin tells her what is happening in every office in the zone. So does Suresh, the admin manager, who has been in the organization for six years and is clearly very ambitious. Often the data they give her and the opinions they voice are similar. But sometimes they are dramatically different. And she wonders: who is the Narada and who is the Manthara?

One can argue that Jagruti should not encourage either Nitin or Suresh. But when one is made responsible for a zone for 50 crores with 200 employees and is expected to show results in six months, one has no choice but to rely on the views and opinions of people who have been around and who can ramp up her learning curve. Data in excel sheets are not enough. Yes, Jagruti will eventually meet all her 200 subordinates and make up her own mind but in the meanwhile she needs some information about the motivations and personality styles of her regional and area managers and her vendors and even her team.

Jagruti is acutely aware that being a woman, most men are wary of her and do not know how to relate to a woman in a position of power. She wonders sometimes if Nitin or Suresh are being patronizing. She wonders if they are manipulating her, making her take decisions to serve their own ends. She wonders if they have her best wishes in mind. Maybe they are working for people higher up in the organization who want her to fail. Suspicion fills her mind often. And so does faith. Maybe they are genuinely good people. Who knows? In real life, no one comes with haloes or horns. Distinguishing Narada from Manthara is not easy. Whether their advice is for the good of the organization or for their own self-interests will be realized only in hindsight.