Shutting Up a Vampire 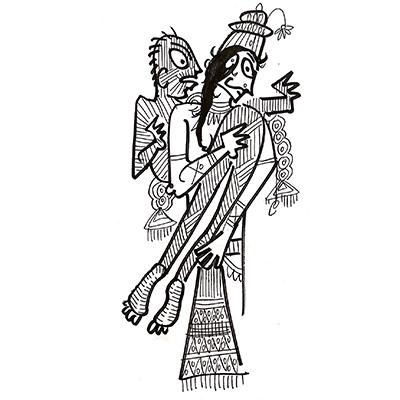 A vampire in Indian folktales is known as a vetala. It is unable to cross the river Vaitarni and go to the land of the ancestors. So it lives in the crematorium, inside a corpse, using its tongue to speak. If you can bottle a vetala, you can use it for sorcery and gain occult powers. But you must never speak to it before it is bottled, else it will slip out of the corpse and occupy another corpse.

A sorcerer once asked King Vikramaditya of Ujjain to bring him a vetala. But the vetala was cunning, unwilling to be bottled. He would tell the king a riddle and ask the king to solve it. The riddles drew attention to many legal, moral and ethical dilemmas. ‘If you know the answer and keep silent, your head will burst into a thousand pieces,’ warned the vetala. Unfortunately, the wise king knew the answer, and the vetala kept escaping, twenty four times. The final question, the king could not answer.

The ‘vetala’ story collection is clearly form India’s Tantrik Age around 1200 years ago, when there were Buddhist siddhas and Hindu nath-jogis who claimed to have occult powers over life and death, which involved working in crematoriums with ghosts, goblins and witches. This is before the arrival of Islam, or the rise of Bhakti, when circular open-roofed temples of yoginis were in vogue. It was a society oscillating between lascivious men who wanted to seduce chaste wives, and passionate women who tricked their husbands to have secret lovers. It was a very different India from what we know today.

In one ‘vetala’ tale, the king falls in love with the beautiful wife of his minister and all three wonder what’s the righteous course forward. In another tale, a woman cannot decide if she loves the brilliant man or the handsome man. There are stories where daughters of rich men use their father’s wealth to marry criminals. There are stories where fathers who don’t trust their daughters are admonished as are husbands who don’t trust their wives. The vetala asks: Who loves a woman more? The one who jumps in her funeral pyre, one who clings to her ashes, or who brings her back to life? The dacoit who let her go back to her husband or the husband who let her go to the man she truly loved? The man who made her pregnant or the trickster who married her?

The vetala is not sexist. He speaks not just of delicate women, but also delicate men. Is it the queen who can’t bear a flower falling on her body, the weight of moonbeams, or the sound of the pestle? Is it the man who can smell corpses in rice cooked in a crematorium, the one who can smell dogs in the breath of a courtesan who has pets, or the one who gets a backache when a single strand of hair is placed below his mattress?

There are stories of fathers who in poverty are willing to sell their middle sons, unloved by either parent. There are stories of old sorcerers who realise they spend their entire life accumulating powers only to spend it occupying the corpse of a young lad in order to experience lost youth.

Finally there is the story of incest that even Vikramaditya is unable to answer: what is the true relationship between a man and his wife. His father is married to her grandmother. And her mother is married to his grandfather. If you can answer it, the vetala will leave you alone, and return to the crematorium.