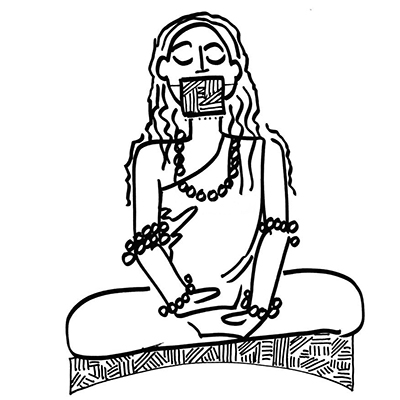 Historians of yoga focus their attention on Patanjali, Vasishtha, Vyasa and Goraknath. Postmodern gurus transform Shiva into the fountainhead of yoga who reaches out to humanity via seven male preachers, the sapta-rishis, mimicking the God of Abraham whose commandments reach humanity via male prophets. Neither gives much importance to yoginis or rishikas, the female fountainheads of yoga, until a ‘feminist’ points out the incompleteness of such popular discourses. Only when chastised, is the female considered, but only as an afterthought, accompanied by a nervous patronising chuckle.

Religions around the world have always sidelined women. In Western mythology, the patriarch takes the form of a violent hero-god, like Marduk or Zeus, who overpowers and organises the ‘chaotic’ Mother Goddess. In Hinduism, this happens through monastic orders which venerate the Mother Goddess, but simultaneously see women as temptation, delusion, and material for entrapment. They are obstacles to ‘higher goals’.

How many of us know that the Indian Parliament’s circular shape was inspired by a Yogini temple? Such circular temples, open to the sky, are found in Odisha and Madhya Pradesh. Built a thousand years ago, their inner rim is lined with images of 64 different women in different moods and different roles: some are warriors, some are dancers, some are mothers, some are cooks, some are scholars. Such rings of confident women are found on the outer fence walls of most Buddhist stupas and Hindu temples. But even art historians dismiss them as nymphs and damsels and female guards of the harem, not yoginis or rishikas.

How many of us have been told the story from the Mahabharata of Sulabha, the nun who challenged and defeated Janaka by declaring the soul has no gender, and that she is not inferior by choosing not to marry? How many us have been told the story from Yoga Vasishtha of Chudala, the queen, a yogini, who used her powers to shapeshift and convince her husband that women, and wives, can be gurus?

Monastic orders have historically rejected the feminine. In Buddhism and Jainism, the female anatomy is said to prevent an organism from attaining the highest state, which is why male leaders dominate, despite there being more nuns in the community. Tara, the Buddhist goddess, is accepted by Mahayana Buddhists, but not the older, more conservative Theravada Buddhists. Conservative Digambara Jains deny the Shvetambara claim that Marudevi (mother of the first Tirthankara Rishabha-deva) and Mallinatha (the 19th Tirthankara) attained kaivalya despite being women. Amongst Hindus, Nath lore informs us how Gorakhnath, the yogi, liberated his own guru Matysendranath, the tantric, from the clutches of the yogini queen and her female kingdom, but the yoginis remain sources of great power.

However, these monastic orders always faced a strong push. The sky-ward masculine gaze was always tempered by the earth-bound feminine gaze, which is why maithuna images of couples are part of Buddhist, Jain and Hindu art. Krishna could not be worshipped without Radha, nor Shiva without Shakti. This value placed on the feminine ended with the Islamic – and later Christian – emphasis on monotheism.

When there is only one God, there is place for only one gender, and no room for androgyny. As more and more kingdoms of medieval India were ruled by Muslim kings, we find more and more poet-saints referring to God as formless (nirguna), while referring to the divine using masculine pronouns (He, Him). As in Sufism, a male Hindu bhakti poet visualised himself as female. God when visualised as female was always mother, never the lover, the wife, the daughter or the sister. By infantilising oneself before her, sexuality is stamped out.

Academicians, scholars and holy men who reframe Hindu philosophy using Western templates for the satisfaction of Western audiences, have privileged the male over the female, spirit over substance, mind over matter, spiritual over material. And so today, shrines are being built to Yogi Shiva where Yogini Shakti is nowhere to be seen. Bhagavad Gita, where Krishna talks to Arjuna, has been given more importance than Gita Govinda, where the dalliances of Krishna and Radha are described. Even political organisations who allegedly speak for Hindus, want to build statues of Ram without Sita by his side – a totally unacceptable, inauspicious thought in the traditional world. These politicians prefer the still yogi to the dancing yogini. They believe women are best contained through marriage and maternity. No wonder respect for women is at an all-time low in Indian society.

Twentieth century holy men continue this patriarchal view when they speak of yoga in terms of purity and power. Purity comes by shunning the feminine. Power comes by shunning pleasure and materialism. Wisdom demands submitting to the whims of the male guru who has given up the world, yet enjoys having his whole ashram revolve around him. Women are gently nudged to contain their damsel nature, even strip themselves of it by renouncing adornment, or shaving their heads, lest they turn into yoginis with unbound hair and challenge the liberated yogi’s position of privilege.