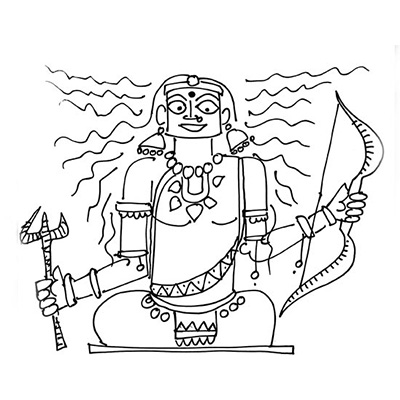 Television has introduced India to Shiva’s daughter, Ashokasundari, and Ram’s sister, Shanta. The reception in either has been dramatically different. While most people were enthusiastic about Shiva’s daughter, many were alarmed about Ram’s sister. On one side, there was the positive reaction: ‘Really, Shiva had a daughter?’ On the other, there was a negative reaction: ‘Rubbish, Ram did not have a sister!’

Information on Ashokasundari is scarce, a slip of a tale found only in the Padma Purana, with some folklore from Gujarat, Tamil Nadu and Bengal about Shiva and Parvati having a daughter. By contrast, the story of Ram’s elder sister, Shanta, given in adoption to Lompada or Rompada of Anga, is a far more popular tale, even finding mention in some renditions of the Valmiki Ramayana. It is found in Vyasa’s Mahabharata and in folk songs of Telugu women. Shanta is furious when she learns of how Ram abandons the pregnant Sita following street gossip.

Who is truer: Ashokasundari or Shanta? More important than this question is another question: Why do people react differently to new information – sometimes with enthusiasm and sometimes with alarm?

We are a country shaped by oral tradition. Yet, under the influence of Westernisation, we give greater value to textual traditions. As long as it is found in text, we are okay with it. But, not always. Familiarity with the stories also plays a key role. Television viewers are far more familiar with the story of Ram than with Shiva’s story. Ramayana, especially Tulsi Ramayana, is read in many Hindu homes. And, thanks to Ramanand Sagar’s Ramayana, the story of Ram has been ‘seen’ by millions. Also, when the story of Shanta is told, it appears as an afterthought, rarely directly linked with the birth of Ram. Naturally, a new story in unfamiliar territory – despite less evidence – as in case of Ashokasundari, is greeted with excitement. However, a new story in a familiar territory – despite evidence – as in the case of Shanta – makes us uncomfortable.

Then comes the issue of the girl child. Can modern television show God preferring only male children? Should Shiva also not have a daughter? And should we not question Dashratha’s obsession with sons? He does conducts a putra-kameshti-yagna, for sons, not daughters. Even Gandhari, after a hundred sons, desired a daughter, not Kunti. Have we ignored the story of Shanta since we do not want to deal with the idea of Indian society preferring sons over daughters? Isn’t Janaka’s adoption of Sita not special? Did he adopt her because she is a girl, because she is a ‘divine’ girl germinated from the earth, or because she is an ‘abandoned’ girl found buried under the earth? What story we choose often reflects not just our devotion for our Gods but for our attitude towards the girl child.