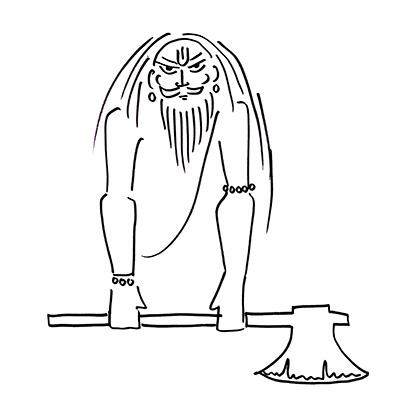 No, this is not a review of the film recently released in theatres. This is about the philosophical idea ‘Ship of Theseus’ also known as ‘Abraham Lincoln’s Axe’. This idea was popular amongst Greek philosophers and became popular amongst modern Western philosophers. Modern discussions on this idea very rarely take Indian thought into consideration.

The philosophical puzzle is this. Once upon a time there was Greek hero called Theseus who sailed to Minos on a ship. After many adventures, he returned home. Along the way, parts of the ship had to be changed. Over time, every part of the ship was changed. So the ship that left home was materially very different from the ship that returned home. So was it still the ship of Theseus?

Western philosophy is obsessed with ‘the’ truth hence Western philosophers tend to argue a lot. So there are many arguments about what actually constitutes The Ship of Theseus or Abraham Lincoln’s Axe. Amartya Sen argued that Indians are argumentative too! He was desperately defending the idea that Indians also think like Europeans. Actually we don’t. The Indian philosopher saw argument as a sign of incomplete information — a desperation to prove that one understanding is better or more correct than another understanding when wisdom is about accommodating and appreciating all understandings. So why argue? Just understand and celebrate the other’s point of view. That too is right. Tat tvam asi, as the Upanishads say.

Indian thought typically values impermanence over permanence, and thoughts over things. This is the dominant trend, though even the opposite is true (Charvaka philosophy for example). So the idea matters more than the thing. In Puri Temple, the deities are regularly destroyed and re-created. So the God changes yet remains the same. The part keeps changing the whole remains the same. The idea matters more than the matter. Ideas are not permanent. They change too. Intially, God is in the form. But overtime we realize, God is in thought — the form provokes its realization. Finally, we value both thought and form as different people value different things in different stages of intellectual and emotional evolution.

Of course, we must not forget the famous Vikram-Vetal story where a woman replaces the head of her wrestler-lover with the head of her poet-lover. She changes the parts and ends up changing the whole: for the new creature, with the poet’s head, loses his muscular body and the creature, with the wrestler’s head, exercises to make the poet’s body more toned and more desirable. The poor woman confused the idea with matter, as do we. We forget the puzzle gets more complicated, if the Ship of Theseus or Abraham Lincoln’s Axe is a person, not a thing.