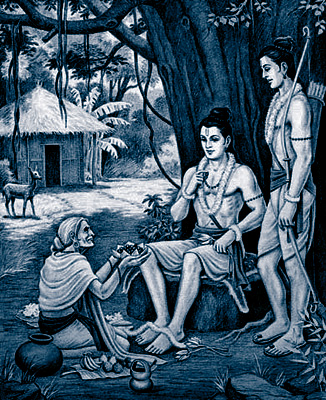 Published in Corporate Dossier, Economic Times on 2 May 2008 as ‘Work it Out’

In the forest, Ram met an old lady called Shabari who invited him to a meal in her house and offered him her meager fare: berries she had collected in the forest. Lakshman who followed his brother was horrified to see Shabari taking a bite of each berry before passing them on to her brother. Sometimes, she did not even pass the berry; she just threw it away. “How dare you give leftover food to my brother?” Lakshman snarled. “Do you know who he is? He is Ram, king of Ayodhya!” An embarrased Shabari threw herself at Ram’s feet and apologized for her mistake. Ram, however, hugged the old lady affectionately and reprimanded Lakshman, “She acted in good faith.” He explained that Shabhari’s intention was not to give Ram leftover food. She was only taking a tiny bite of the berry to make sure she offered her guest only the sweetest and most succulent of berries. In her world, it was not considered inappropriate from giving tasted berries to guests. Her biting the berry was a mark of caring, not a sign of insult.

When Jai took over as the CEO of a small manufacturing firm, he was quite annoyed on the first day to find members of his office staff standing up when he entered the office. “Such sycophants!” he concluded, not realizing that for the past forty years, this was the standard ritual of respect followed by the organization. By seeing things only from his point of view, Jai had ended up judging his team rather harshly.

Jai declared that he everyone should call him Jai (short for Jaikishan), not Mr. Das. And he insists on calling everyone by the first name. It’s the American way, he says, impressed by it no doubt. Suddenly Mr. Parmeshwaran has become ‘Parmesh’ and Agarwal-ji, has become ‘Sudhir’, and people have finally discovered that Lal-ji’s first name is ‘Ramesh’. Everybody in the firm has now concluded that Jai is an autocrat; that he is young blood who does not respect elders. The leader’s intention was anything but disrespectful. As Jai explained, “This is now the global trend. Very democratic. We give out the message that everyone is equal in the round table of the team, irrespective of age or qualification or experience,” explains Jai. A noble thought indeed — but from whose point of view? For a people who for over four decades have addressed each other formally either using the prefix ‘Mr.’ or the suffix ‘-ji’, turning American overnight is quite difficult. But Jai did not think of their discomfort when imposing the American way.  He ended up earning the ire of his entire team. If only he had been sensitive to their point of view.

Of course, Jai can argue, why can’t his team see things from his point of view. Why should only Ram be sensitive to Shabhari, why can’t Shabhari be sensitive to Ram? Was it not thoughtless on her part to offer tasted berries to her guest? She should have at least checked if her way was not his way. Or she should have at least explained what she was doing. Such arguments assume that Ram and Shabari are on the same awareness level. They are not. In the epic, the interaction between Shabhari and Ram has a clear presupposition that Shabari is forest-dweller, unexposed to the ways of the world while Ram is educated, well-traveled, and hence more aware of the ways of the world. The burden of being sensitive to the other therefore squarely falls on Ram, not on Shabari. Sensitivity is a prerequisite to leadership. It can be quite trying, constantly trying to negotiate through the feelings and thoughts of the others. But is there a choice?

Our refusal to see things from others point of view, our need to jump to conclusions by registering only our point of view, stems in most cases from laziness. We just don’t want to make the effort of taking a 360 degree view of the situation. It is so much easier to assume that we know best and our view is the right view. But leadership is not a solitary venture — leadership is not about the self, it is about others. It is about influencing the other’s viewpoint; and that can only happen if one is willing to invest one’s energy into understanding where the other is coming from. All around us, in our teams, are Shabharis about whom we have, as Lakshman, assumed the worst. Look at them again through the eyes of Ram: you will observe the innocence beyond the alleged insult.

This article is also listed under Business, Indian Mythology, Ramayana