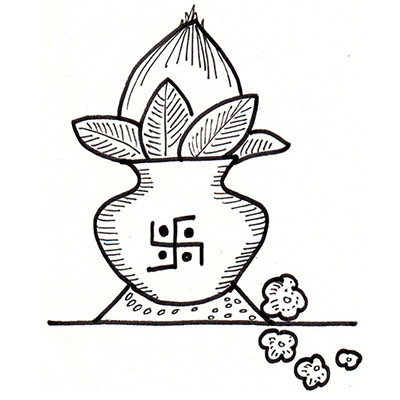 When someone passes away and people say, Rest in Peace, or RIP, they are being part of a paradigm where death is followed by waiting in purgatory till the final day of Judgement, a concept found in Christianity and Islam. In Hinduism, the soul does not rest in peace; it hopefully Travels in Peace, TIP, to the other world of the dead, and from thence to the next life. Usage of RIP is indicator of the profound influence of biblical ideas in secular life, overshadowing all other religious ideas.

Once you believe in the popular misconception that ‘all religions are the same’, you stop noticing that there is a unique idea that separates the Dharmic or Karmic faiths based on rebirth, such as Buddhism, Jainism and Hinduism, from faiths based on one life, such as Judaism, Christianity and Islam. You see all religious difference being cosmetic and ignore the systemic differences at the core.

One can detect at least seven Abrahamic influences in reshaping contemporary Hinduism.

First: The idea of one true god, source of all creation, and rejection of false gods and idols is central to Christian and Islamic faiths. Hinduism thrives on polytheism: many truths, and polygenesis, the thought that ideas can emerge simultaneously in different parts, in different times. Truth is not seen as a singular entity, but as a quantitatively infinite entity. So there are no ‘false’ gods to be smashed or idols to be broken. The point is to increase our understanding of infinite God (ananta) by finding connections between everything. It is about expanding the mind – knowing fully well that infinity is going to be out of reach.

Second: Text is central to Christian and Islamic faiths. There is no obsession with referring to texts as source of wisdom, but rather rituals, symbols and stories. There is a family of beliefs that loosely binds Hindus, not dogma. Anybody who keeps referring to texts to explain Hinduism is following the Abrahamic template. Hindu sects that cling to a single book as the source of their knowledge, or to a single guru as the source of their interpretation, and inspiration, are following the Abrahamic model.

Third: Under Islamic influence, justice became an important concept. We assume that justice is a universal concept, but it is not. Justice, as an idea, is strongly Islamic, where God is seen as a judge who will send you to heaven or hell based on your behaviour, which is either aligned to His rulebooks or not, and so, halal and haram. If one sees God as a judge and the whole world as a courtroom and holy books as law books, one knows that one is following the Islamic paradigm. In Hinduism, God, at best, is an account keeper ensuring you pay your karmic debts. Debts are more or less, not good or bad, quantitative not qualitative.

Fourth: The belief that God is outside creation and not inside, and therefore a transcendental entity who is kind, loving, just and is not part of nature, is a Christian idea. In Hinduism, God is inside creation; He is both jivatma located inside you and parmatma located outside you. The idea of God inside you or the wisdom being within you is unique to Indian thought. God is not just out there. If you believe God is outside in heaven, you are strongly influenced by Christian ideas.

Fifth: The notion that all are equal before God is a Christian and Islamic concept and does not apply to Hinduism, where diversity is celebrated and everybody is seen as a manifestation of their karmic burden and, therefore, different from one another. Greater focus is given on uniqueness, rather than sameness, in Karmic faiths. The idea of uniform costumes and rituals controlled by central authorities is seen in Sunni Islam and Catholic faiths.

Sixth: While Islam is linked to Mecca, Christianity, and Judaism to Jerusalem, the doctrine of these respective faiths is presented as universal, transcendental, applying equally to everyone from America to Japan, not merely to desert cultures. The idea of universal Islam towers over Islam in Arabia which is quite different from Turkish Islam or Persian Islam, or Islam in Kerala or Lucknow. American evangelical Christianity is very different from Coptic Christianity of Ethiopia or Orthodox Christianity of Russia. But these differences are seen as originating from politics not from gospels. By contrast, Hinduism is firmly bound by geography. Hinduism, in Orissa, is connected to the Jagannath temple. Hinduism in Maharashtra is connected to Pandharpur, to Khandoba. Hinduism, in the south, is connected to Tirupati. In the west, it is connected to Srinathji. In Assam, it is connected to Shankardev. Hindus of Gujarat will find greater joy in the songs of Narsi Mehta, while Hindus of Tamil Nadu will prefer the poetry of Alwars and Nayamnars, which will make little sense to Odia Hindus who will prefer the songs of the Panchasakha poets. The attempt to unite all geographical variants of Hinduism with universal Gita, vedas, Sanskrit shlokas and Bollywood music is a 20th century phenomena spearheaded by Hindutva lobbies.

Seventh: The idea of the ‘Chosen People’ comes to us from Judaism, where God chooses one group of people over others. If you start believing that Hindus are special and that Hinduism doesn’t encompass every human being, then you are following the Judaic not the Hindu model. You cannot get into or get out of Hinduism. You are born Hindu. You don’t choose and God doesn’t choose you. The connection always exists, and you just discover it.