Seeing Mahabharata from the Point of View of the Forest 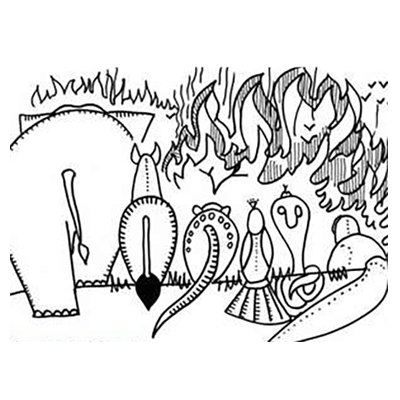 “When Might Is Right: Seeing Mahabharata from the Point of View of the Forest.”

Hindu philosophy makes no sense without appreciation of the constant comparison of the forest (aranya) with settled communities (grama). This division begins with the Sama Veda. Since the epics Ramayana and Mahabharata were meant to propagate Vedic values, it is not surprising that forests play a key role in both epics. It is the place where princes go to when in exile; it is where they encounter sages, demons, animals and all kinds of strange creatures. A study of the Mahabharata makes this most explicit.

Once upon a time in a forest, there lived five orphans, the sons of Pandu or Pandavas. They were raised by their mother. Their father had died. Then one day, their mother told them that they were actually princes. They belonged to a royal family. She took them out of the forest, to their father’s house, in Hastinapur, to be raised as princes.

They had 100 cousins, the Kauravas, there who did not like them. Especially because the Pandavas were extremely talented and intelligent. The cousins did everything in their power to make the five brothers feel unwelcome. They poisoned their food and finally set their house on fire. This forced the five brothers to return to the forest, this time as refugees.

They stayed in the forest. They fought demons and barbaric monsters like Baka and Hidimb and Jatasura. One of them married the demon princess, Hidimba. And finally, they won an archery contest that enabled all five brothers to marry one princess, Draupadi. With this princess by their side, the five brothers felt they had the strength to return to their father’s house and demand their share of inheritance. The 100 cousins were forced to give away the forest of Khandava to the Pandavas. So the sons of Pandu returned to the forest as its owners.

The Pandavas burned this forest and established on it the city of Indraprastha. But because the city was built by burning a forest, they were cursed by all the animals burned. Their success made them arrogant and overconfident. They, foolishly, accepted an invitation to a game of dice, where they gambled away their entire kingdom. They forfeited the rights over their kingdom for 13 years and were forced to return to the forest as exiles.

It was during this exile that the forest taught the Pandavas humility and took away their royal arrogance. They were taught that in nature, nobody sees them as royalty. There are only predators and prey in the forest. At the end of 13 years, they returned to claim their kingdom but their cousins refused to give it back. This resulted in a terrible war in which all the Kauravas were killed. The Pandavas claimed not just their own kingdom but their father’s kingdom as well. They ruled it wisely for thirty years. At the end of which, they bequeathed their kingdom to the next generation and returned to the forest as hermits, willing to die.

But after death, when they entered paradise, they found that the gods had given shelter even to their cousins. This angered them. The gods then reminded them that, on Earth, the Kauravas refused to share their kingdom. Surely, they interjected, after death, the Pandavas must be willing to share the afterlife with them. Otherwise, what was the difference between the two? Paradise, unlike the forest, supports everyone. Paradise, like the forest, has no favourites.

Thus, one finds the Pandavas beginning life in a forest, as orphans. Returning to the forest as refugees, then masters of the forest, then exiles who learn humility from the forest, and finally as hermits to the forest who see how forests treats everyone equally. Seen thus, Mahabharata reveals a Vedic truth. In the forest, might is right. No one gets help. In settled communities, the measure of civilisation is how much we help fellow humans.