Sea of Spices: How Trade Gets Intertwined With Myths 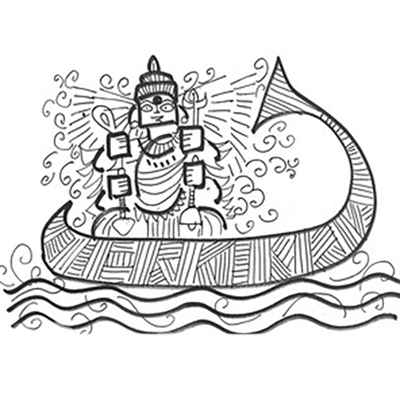 There was a goddess called Harsiddhi Mata who resided atop a hill, overlooking the sea in the coastal areas of Gujarat and Sindh. She would see ships sailing by. There were those who would see her temple and not venerate her. So, casting a malevolent eye, she would wreck the ships. Realising her power, the sailors went to her shrine and apologised to her. They called her Vahanavati-mata, she enabled movement of ships.

They made offerings to her and requested that her temple be brought down from the hill to lower ground. They did this so that she would not cause any more shipwrecks. The goddess agreed, with a provision. For every step taken down, they needed to sacrifice buffaloes in her honour. The sailors did so. The goddess moved her temple, from the hill overlooking the sea, to the shrines on the ground below.

Even today, the goddess is offered goats as gifts. It is a reminder of her ancient maritime relationship with the shipping communities of the Arabian Sea. These communities used to trade with Arabs and Africa for spices. The goddess is sometimes called Sikotar Mata. Her name actually draws attention to a Yemeni island of Socotra, known for its treacherous shoreline. The name Sikotar may come from ‘sukhadhara’ which means ‘providing bliss’.

India’s coastal regions were associated with sea trade, as per a 2000-year-old Greek text, Periplus of the Erythraean Sea. It mentions trade from the Red Sea, along the Horn of Africa, to Arabia and the western coast of India. It refers to the trade with Bharuch, the land ruled by the Chera and Pandya kings. But even before, 4000 years ago, archaeologists tell us that reed ships sailed along the coast from the Harappan cities to the Sumerian civilisation (modern Iraq) via the Persian Gulf. Known as Meluhha, cities along the Indus were famous in the Akkadian Empire for its beads, its cotton, sesame oil, chickens, dogs and water buffaloes.

Even after the Harappan cities collapsed, trade continued. From 3000 years ago, we have mummies in Egypt containing pepper from Kerala.

Hero stones of the Shilahara and Kadamba kings from the Konkan coast attest to Indian ships nearly 1000 years ago. In Mumbai city, at Borivali, there is the Eksar stone which shows a naval battle. But then the Brahmanical rule of ‘loss of caste’ if one travels overseas became widespread. The first mention of this rule comes from the Dharma-shastras. This was the dreaded ‘kala-pani’ rule. It hurt sea-merchants the most, especially those who patronised Buddhism, and funded Buddhist cave temples seen along the Konkan coast. This rule lost its power only in the 19th Century as many Indian started to migrate first as indentured labourers to Caribbean islands, and later to become Barristers in London, and still later when it became important to transport Indian soldiers across the sea to help in international wars of the British Empire.

We don’t know much about India’s maritime history because for the last 1000 years Indians outsourced sea-trade. It was initially dominated by Arabs who used to take advantage of the monsoon winds to travel to India and trade in spices. These Arabs spread Islam to coastal India and Southeast Asia. They brought wealth to the Muslim world, that overshadowed global politics from 700 AD to 1700 AD.

Europeans realised that the wealth of the Muslim world came from the spice trade.

They had been cut off from that wealth because the Muslims controlled the silk route. This was one of the motivations that led the Portuguese and Spanish of the 15th Century to bypass the Silk Route by establishing new sea routes. They discovered a way across the African Cape of Good Hope. And in East Africa, they learned about the monsoon winds which brought them to Calicut.

The motivation was not just economic. The Portuguese kings were desperate to find the Eastern Christian kingdoms. They had heard during the Crusades that India was a land where a great Christian Empire existed. It was of Prester John.

They hoped that with this help, they would attack the Muslim kingdoms both from the West and the East and recover the Holy Lands. That was not true of course, but the story of Prester John informs us how mythology like politics and economics contribute to the development of science and technology.