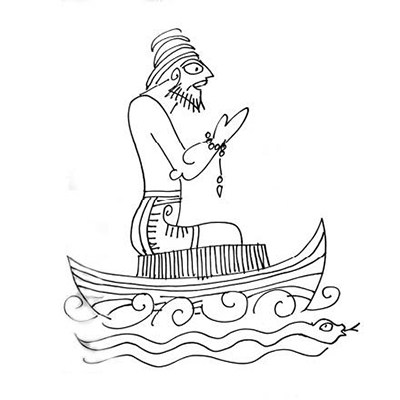 If you travel to Cambodia, you will come across a folklore that a sage from India known as Kaundinya travelled across the sea to what is now called Cambodia, where he encountered a Naga princess, who fell in love with him. She happened to be the ruler of the local people and married Kaundinya. From them descend the kings of the Kingdom of Kamboja, which later came to be known as Cambodia. Was this Kaundinya Hindu or Buddhist? We really don’t know. In fact, in ancient times, in faraway lands, few differentiated between the two.

In Hindu mythology, Kaundinya does not play an important role, although he is recognised as one of the sages who travelled from the northern part of India to the southern part of India and over the sea to Southeast Asia. So, he is linked with the transmission of Vedic beliefs and practices, across the subcontinent and beyond.

Kaundinya plays a much bigger role in Buddhist mythology. When Siddhartha Gautama is born in the Sakya clan, many sages predicted that he may either be a sage who gives up the world and discovers wisdom, or he will become a great king who will conquer the world. Kaundinya is the only sage to insist he will never be a king but a hermit and he vows that he will be a follower of the hermit. Years later, when Siddhartha gives up his kingdom and goes to the forest and lives the hermit’s life, Kaundinya and his student follow him, but only until the day Siddhartha refuses to practise self-mortification. When Siddhartha returns as the awakened one or the Buddha, Kaundinya follows him once again and plays an important role in the establishment and spreading of the Buddhist thought across the world.