Sacrilege As a Political Tool 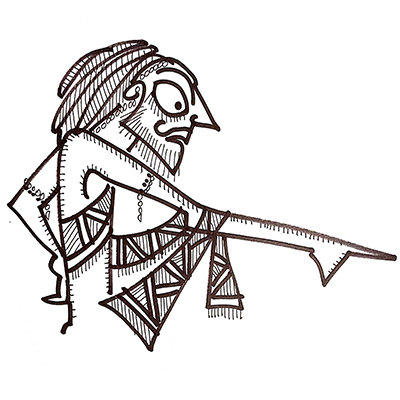 Animals can attack you if you claim their foraging grounds, i.e. their territory. Humans can attack you if you trespass on their holy land. Holiness is a human construct designed to make us believe there is something more to this world than the mundane life of food and security, that we are not animals. We are special. Our lives have meaning and purpose. Thus any attack on things deemed holy is an attack on our sense of self, and our self-worth.

Holiness is created in many ways. The oldest way is taboo. You are not allowed to enter a particular place, or touch a particular person or object, either always or during a particular ritual. The more you tell a person not to go up a mountain or into a valley, or not touch someone or something, the more he wants to, and the more power is granted to the object of taboo. This creates hierarchy – those with access to the taboo object become special people: priests, shamans, mystics.

Holiness is manufactured through ritual performance. A space or a time is charged with special art, rhythmic chanting, singing, music, and practices like wearing of special clothes, offering of special food, dancing, moving, lighting lamps, pouring water, listening to sermons, sitting in silence. Such dramatic sights and sounds evoke serenity or awe. Drums are beaten. Incense is lit. Chanting intensifies. All this makes the body feel the presence of something more than the natural – the extra natural, the supernatural. We start believing in the existence of the spirit, forces that give life and impact fortune. We turn to these forces in times of suffering and insecurity.

When spirituality is socialised, and informs the economic and political behaviour of a group, it becomes religion. Spirituality is a private quest for something beyond the material. It is essentially deep psychology. But it can be a lonely journey. So we seek companions, who can guide us, or follow us, or encourage us. This creates a cult, a sense of belonging and family, which then needs to be institutionalised and made immortal, and protected from contamination and outsiders. Eventually, this cult attracts powerful people – kings, merchants. They patronise the order, contribute to its upkeep, convinced that by contributing to the order, they are gaining blessings of mysterious forces. This then impacts the kingdom and everyone is now part of the belief system that starts reaping political and economic dividends. For now, that belief can mobilise people, make them soldiers in a holy war, or contributors to a holy cause.

All religions use the vocabulary of the sacred and the holy to create gradients of power that are protected at all costs. It gives meaning to people. So the act of violating a sacred area, or vessel, animal, person or practice, evokes rage similar to the rage of a tiger when its territory is encroached, or a swarm of bees irritated by those who touch their hive. This results in people being killed, their arms cut, their eyes gouged out, they being lynched – and those doing these heinous acts feeling smug righteousness. Books that proclaim equality become tools to promote inequality as those who venerate the book become holier than those who do not see it as anything special.

Rational ‘cancel’ cultures are no different from religious wars fought in the Middle Ages. There is outrage even here when someone does not believe what you do or act as you expect them to. You are punished for trespasses of centuries past. This outrage feeds into the ego – makes you feel that you are right and they are wrong, that you are good and they are bad. The more you want to control people, the more fragile you become, the less generous you become, the more irritated you get with the slightest of violations.

In Hindu mythology, Shiva is cool and calm even when insulted as he does not understand this human need for respect and pride. That is why he is called Bholenath. He gets annoyed with stupidity, annoyed with people who think they are more important than others in an ecosystem. Thus he attacks Daksha who continues with his yagna even after his daughter, Sati, kills herself, following a disagreement with her father. When rituals and temples and books and gods become more important than people, even the gods get annoyed. For rituals and temples and books and gods exist for people, not the other way around.