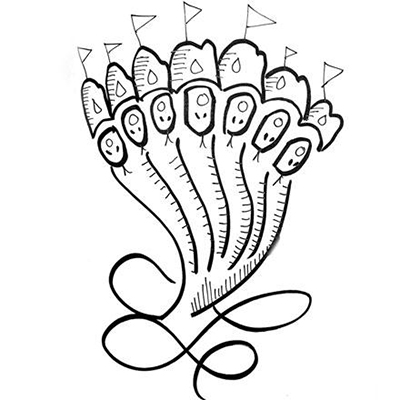 Once Vishnu and Laxmi had a quarrel. Laxmi left Vaikuntha in a huff, and came down to earth. Vishnu followed her and tried coaxing her to return, but she refused. So, Vishnu decided to remain on earth, until he could convince her to return. He looked for a home on earth that reminded him of Vaikuntha, and found seven hills on a mountain range that reminded him of the seven hoods of the great serpent, Adishesha, on whose coils he rested in the ocean of milk. He made his home there. Today he stands there, as Tirupati, atop the seven hills of Tirumala.

This idea of a city located in seven hills is found not just among Hindus, but around the world. Rome, for example, is said to be built on seven hills by Remus and Romulus, twin brothers who were raised in the wild by a she-wolf. The city of Mecca is said to be built amid seven hills. Jerusalem is associated with seven hills. It is interesting that in the Bible, in the Book of Revelations, there is a line that says that the Whore of Babylon stands on seven hills. Scholars believe it refers to Rome, which was then persecuting its Christian followers.

Hills have long been considered a sacred space because they appear closer to the gods and hence in many traditions, from Buddhism to Jainism, from Islam to Christianity, mountains and hills play an important role. Moses gets the Commandments atop Mount Sinai, Shiva sits atop Mount Kailash, the Girnar temple in Gujarat is associated with many Jain Tirthankaras, atop Mount Meru live the 33 devas of the Buddhist pantheon and, atop Mount Olympus, live the Olympians, gods of Greek mythology.

In the natural world, we see the seven colours of the rainbow. Musicians have organised seven notes in music and this is, therefore, considered the sacred number of god. The week originated in Babylon. The idea of six working days followed by a day of rest has been adopted by Abrahamic religions around the world. Across mythologies, we have the idea of seven wise sages. In Hinduism, we have the seven sages, Sapta-rishi, and the seven mothers, Sapta-matrika. In European fairy tales, we hear of seven dwarfs who help Snow White. Seven, thus, becomes a recurrent number.

In our desire to make our life auspicious, we give meaning to numbers and objects, like mountains, and surround ourselves with objects, numbers and concepts, whose meanings make us feel comfortable, happy and safe. Seven is associated with good luck and charm. Psychologists believe that it has something to do with the fact that we can remember seven numbers easily and our attention span shifts, after speaking of seven words. Therefore, since ancient times, seven has been considered a sacred number.