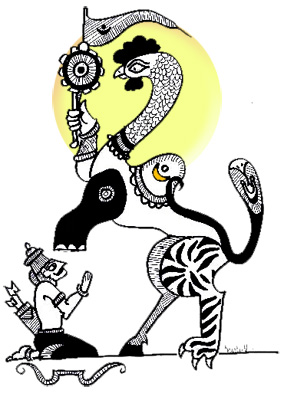 Published in First City Delhi in May 2007.

The Mahabharata from Orissa, written by Sarala Das in 15th century, mentions how Krishna appeared before Arjuna in the form of a composite beast of 9 parts – rooster, peacock, lion, tiger, bull, elephant, antelope, serpent and human. Arjuna was so overwhelmed by the sight of such a fantastic beast that he concluded it had to be God.

Animals play a critical part in Hindu mythology. Some, serve as symbols to communicate metaphysical ideas. Others, as in the story earlier, are animal forms of the divine. Most commonly they serve as `vahanas’ or vehicles of the gods. All kinds of animals are included in the divine family – those that walk, those that swim, those that crawl and those that fly, thus making the animal kingdom a critical component of the sacred landscape.

The story goes that when Brahma created the world, the world took the form of a woman. Brahma fell in love with this woman and chased her. To escape her creator’s attentions, the woman called Shatarupa, took the form of various animals. Every time she changed from cow to mare to doe, Brahma took the complementary male form from bull to horse to buck. So all creatures in the world came into being. There are other stories like how Brahma’s son Kashyapa had many wives and in them he fathered all kinds of beasts. Thus Kadru became mother of serpents and Vinata became mother of birds. Shiva is called Pashuapati, lord of all the beasts.

The first of all animals was of course the fish. Vishnu’s first incarnation was that of the fish since only the fish could survive the great deluge of Pralaya that destroys the Hindu world. A fish saves all that can be saved; it tows the boat on which sits Manu, the fountainhead of humankind.

The next animal that matters is the turtle on whose flat and stable back rests the earth. The turtle has been associated with stability, longevity and it represents a sage because like a sage it can withdraw into its shell and meditate.

The god of the sailors in medieval Sindh, Barun, was visualized as riding a fish. Ganga, the river-goddess, rides a river dolphin or Makara while her sister, the more serious Yamuna, rides a turtle. Makara, some say, is not a river-dolphin; they say it is a river crocodile. Technically, Makara is Capricorn, with the head of an elephant and a rear of a fish. Capricorn represents spring and fertility and is the symbol of Kama, the god of love.

Many goddesses in South India hold the parrot in their hands, like Kamakshi and Meenakshi, reminding all that these Goddesses, all forms of Shakti, succeeded in turning the celibate Shiva into a householder.

Shiva rides Nandi, the solitary bull, and stays away from the material world, until the goddess enchants him in. The Goddess is called Gauri, the cow, but she is also Kali, who rides a lion and drinks blood in battle. In her most frightening form as Chandi, she rides a Vetal or ghost. She rides a lion or tiger into battle when she is Durga, the protector.

Lakshmi, goddess of wealth and fortune, rides an elephant. This elephant is milk white because it rose from the ocean of milk. Elephants symbolize power and prosperity and are also associated with Indra, king of the gods. They represent the rain-clouds and water. Lakshmi is also associated with the owl. This owl represents Alakshmi or Lakshmi’s sister, the goddess of strife. Every devotee is asked to acknowledge the owl else wealth will always come into the house with strife. Lakshmi is the consort of Vishnu who rides a hawk called Garuda, the king of the birds, associated with the sun.

The sun is visualized riding a chariot pulled by seven white horses. His son, Revanta, god of the chase, rides a white horse. Many folk gods, like Ramdevji of Gujarat and Mallana of Andhra Pradesh, are visualized as riding white horses and followed by a hunting dog.

Dogs are generally considered inauspicious in Hinduism and are associated with Bhairava, the fierce form of Shiva, who wanders in crematoriums. Dogs are looked down upon because they eat garbage and because they are symbols of attachment – constantly chasing their masters.

Cats, especially female cats, symbols of autonomy, and protectors of their litter, are associated with the Goddess who rides and domesticates the male cat.

Dogs would have seemed the perfect symbol of devotion; but that credit goes of all creatures to a monkey. Hanuman, the monkey-god, is highly revered in Hinduism. The monkey represents the restless mind, making the mighty Hanuman the symbol of what can happen when the mind is disciplined.

In the Ramayan, Ram is helped by many forest creatures. There is Jatayu, a vulture, who tries to save Sita from being abducted by Ravan; there is Sampati, Jatayu’s brother, whose keen eyesight allows him to see Lanka from across the sea; there are the monkeys led by Sugriva; there are the bears led by Jambavan. And there is the squirrel who also helped in building the bridge to Lanka; Ram caressed him giving him permanent marks on his back.

Shani, lord of the planet Saturn, rides a vulture though some say he rides a crow. Crows are associated with the dead. Yama, the god of death, however, rides a buffalo.

Agni, the god of fire, rides a ram. In folk religions, the goddess of fever rides a donkey. In the tribal religions of South Kanara, the gods ride wild boars. Vishnu once took the form of a wild boar to scoop the earth up from the bottom of the sea. The moon they say rides an antelope though in Nepalese Hinduism he is visualized riding a chariot pulled by geese.

Storks are associated with Saraswati, goddess of knowledge. They are symbols of concentration, the way they stand on one foot and focus on catching the fish.

Saraswati, and Brahma, the creator, are also associated with the swan because the swan resides in water but water never clings to it making it the symbol of true detachment – it represents the sage who is engaged with the world but who is not attached to it. Some scholars argue that it is only in modern poster art that swans are associated with Saraswati and Brahma; traditional arts refers to Hamsa which means a gander. And a Hamsa was supposed to have the magical ability to separate milk from water in  a mixture, indicating the power of the mind to discriminate.

Saraswati is also associated with the peacock, mostly in calendar art, not in traditional paintings. This peacock never spreads out its feathers to represent humility which comes with wisdom.

Kartikeya, the warlord of the Devas, son of Shiva, is also associated with a peacock. But his peacock spreads its feathers and displays its beauty, an indicator of masculine pride represented by Kartikeya who is also the lord of the planet Mars. Kartikeya’s banner also has the symbol of the rooster, once again a symbol of male pride and the pecking order. The folk goddess Bahucharji of Gujarat rides a rooster.

Kartikeya’s brother, the elephant-headed Ganesha, rides a mouse, some say a bandicoot, which represents the inescapable and annoying problems of life which Ganesha overcomes.

Ganesha ties a serpent round his belly. The hooded serpent or Cobra is one of the most famous reptiles in Hindu mythology. Coiled with hood upraised it represents stillness and when it is copulating with its mate, it represents movement. Known as Naga, they hold a special place in Hindu cosmology with a whole realm, the Naga-loka, with its gem-studded city of Bhogavati dedicated to them. They even have a king called Vasuki whose sister, Mansa, is worshipped to save people from snakebites. The hooded serpent sits coiled around Shiva’s neck. This serpent is called Karkotaka. Vishnu sits on the coils of another serpent, Adi Sesha, who has many hoods and represents time.

Composite beasts like Makara are a common theme in Hindu mythology. Budh or lord of the planet Mercury rides a Yali which is a lion with the head of an elephant. The cow-goddess Surabhi is sometimes visualized with wings.

There is one god who rides the most evolved of animals – man. This god’s name is Kubera, the pot-bellied god of wealth, reminding all of us how man has become a slave to wealth.