Romeo squads? Let’s rename them after Kichaka or Dandaka 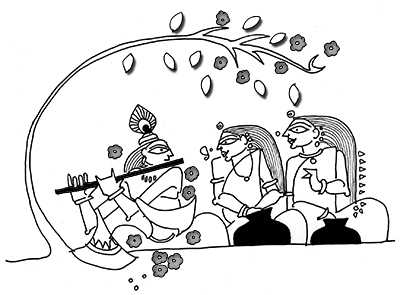 By Devdutt Pattanaik
10th April, 2017
The Times of India

So anti-Romeo squads prowl the streets of UP to protect women from eve-teasers. As you read this sentence, two words grab your attention. Romeo. Eve. Both Western.

Romeo is a character from Shakespeare’s play who dies for his love, Juliet. Eve is a character from the Bible, the first woman who was cast out of Eden after she succumbed to the words of the Devil and defied God, ate the Forbidden Fruit and got Adam, the first man, to do the same, an act that made them aware of their nakedness. In local parlance, Eve has become the virginal damsel and Romeo the dragon who troubles her.

The anti-Romeo squad thus makes itself out to be the knights in shining armour determined to protect her chastity. One wonders if one has stepped on to an alternate reality governed by medieval Christian puritanism on the Gangetic plains? But we have not.

This puritanism stems from a variety of Hinduism associated with the Nath sampradaya, to which one is told chief minister Yogi Adityanath belongs to. In Nath folklore, the greatest enemies of celibate warrior ascetics are spellbinding sorceresses, the yoginis who live in the mythical Land of Women, deep in an enchanted banana grove.

Here all men turn into women, except the jogis. The queen of this grove ensnared Matsyendranath-jogi, founder of the Nath order, but Gorakhnath-jogi managed to break the spell and rescue his master. In this worldview, women are temptations, and sex is an energy-sapping activity that is best avoided, or contained within marriage.

This worldview that locates the hermit over the householder, and men over women, dominates the Hindu right, though in keeping with contemporary thinking, celibacy is no longer linked to the occult. Instead it is linked to service.

The married man is bound to his family; the celibate is free to selflessly serve the world.

But why defame poor Romeo? Why assume that Eve has no agency? Why not use Indian names? Someone suggested Majnu, instead of Romeo. But Majnu evokes Persian-Arabic-Urdu culture, which in the current political mood is code for Pakistan. So who is the Indian (or should we say Hindu) equivalent to Romeo? Can be it Nala, from the Mahabharata, who swoons over Damayanti?

Can it be Udayakumaran of Tamil epics, who chases Manimeghalai, who would rather be a Buddhist nun, or Kedar of Odia folklore whose love for Gauri is as fatal as Romeo’s love for Juliet, or are these too parochial to grab media attention?

When Prashant Bhushan called Krishna ‘legendary eve teaser’ (he has apologised since), he was predictably trolled. One wonders if Bhushan’s rather inappropriate reference to Krishna was based on the pedestrian understanding of Krishna lore, the kind we find in the popular Bollywood song ‘Character Dheela’ from the film Ready (2011).

Here are the lines:

(The intoxication of girls is the most intoxicating of all intoxicants/ Everyone you see here has been made wet in a rain of beauties/ In the name of love everyone now does the playful circular dance of Krishna/ But if I do the same I am accused of having a loose character.)

If one wants to, one can dismiss these irreverent lines as the naivetÃ© of a hopeless romantic. Or, (and currently quite likely) one can get enraged and view these lines as a conspiracy to mock Hindu culture.

Krishna’s relationship with Vrindavan’s milkmaids has been a source of great awkwardness to puritanical Hindus who prefer to silence all analysis of this complex, multi-layered metaphor by insisting it to be just an aesthetic allegory for the relationship between the cosmic soul (param-atma) and individual souls (jiva-atma), devoid of any sensory evocation. To reduce Krishna’s actions to eve-teasing is the other extreme.

A more suitable example could have been Kichaka from the Mahabharata, a member of the royal family who abused his sister’s maid (Draupadi in disguise), despite knowing she was married. Or the squad could be named the anti-Dandaka squad, after the king who raped Shukra’s daughter, and whose kingdom was destroyed by Shukra’s curse. Or one could even name it anti-Dushyanta squad after the king who made Shakuntala pregnant and never returned to fetch her, despite promises to do so.

But wait, isn’t Dushyanta the lover of Shakuntala? Didn’t Kalidasa in his acclaimed Sanskrit play blame the king’s forgetfulness on Durvasa’s curse, revising the earlier and less forgiving Mahabharata version? The line between an earnest lover and an opportunistic lout is a fine one. It’s tough to know the difference even by ‘gazing into their eyes’, especially in a political discourse that valorises celibacy, and demonises love, romance, and sex.