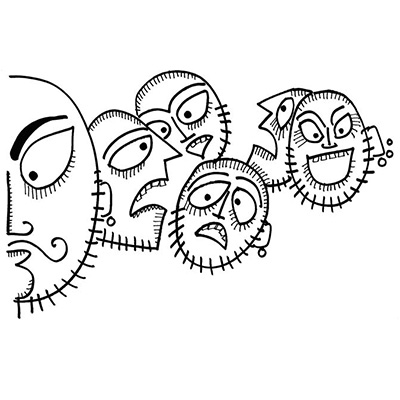 Bhakti is translated as devotion. And, generally, devotion is viewed as something feudal, a kind of loyalty, the kind demanded by cult or tribal leaders from their followers. But, in Hinduism, bhakti is a very complex relationship, an emotional highway that connects the devotee to the deity. This takes many forms such as devotion of the friend (sakha bhaav), of the lover (madhurya bhaav), of the parent (vastsalya bhaav), of the servant (daasya bhaav). The most peculiar form of devotion is called reverse devotion, or devotion of the enemy. This is viparit-bhakti.

In reverse devotion, a demon hates a deity so much that he keeps thinking of the deity all the time, and, by this constant psychological contact ensures his liberation, an eternal place in the deity’s abode. We can call this the law of attraction.

In the Ramayana, Ravana is constantly thinking of Ram and so earns a place for himself in Ram’s heaven. Though he is the prati-nayak, the villain, he also displays nayaka-bhakti, by simply chanting his name, albeit in hatred. Hanuman chants Ram’s name in love, for inspiration, but Ravana chants Ram’s name in hatred and rage. Yet, by the act of chanting he accrues merit that ensures that he achieves moksha at the time of his death. Apparently Ravana is the villain, but simultaneously he is a kind of devotee.

The same idea is repeated in Bhagavata when Kansa is constantly thinking of Krishna, hating him, fearing death at this hand. He is thinking of Krishna so much that his salvation is assured. We find this very idea in the stories in Goddess lore by which Kala Bhairava, who assaults Vaishno devi, ends up as her greatest devotee and guardian.

This idea of reverse devotion transforms every character in a tale of God into a devotee of God. Some know it. Some do not. Hanuman knows it. Ravana does not. Uddhava knows it. Kansa does not.

At its root is the law of attraction. Do you constantly think of a good person, and good things, whatever the motivation, or do you constantly think of a bad person, or a bad thing, whatever the motivation. So, if you think of God, in fear, or rage or prayer, you will attract God’s grace. If you think of tragedy in fear, or rage, you will attract tragedy. In temples, while one is allowed to praise the deity in bhajans and kirtans, one is also allowed to abuse the deity and complain about him in ninda-stuti, so long as we chant the deity’s name.

This intimate understanding of God as friend as well as enemy, lover as well as master, child as well as parent, is lost on many modern interpreters of Hinduism, especially those who wish to model Hinduism as an Abrahamic religion, complete with holy book, prophets and code of conducts – a model that worked for the Holy Roman Empire and the Caliphate. For them, God is something so hallowed, almost an alien creature that no intimacy is allowed. Strangely, these very same people constantly chant the name of their political opponents all the time, far more than God, which means they will end up in the opposition eventually, but never in heaven.

This article is also listed under Ramayana, Vishnu