Rejection of the rest 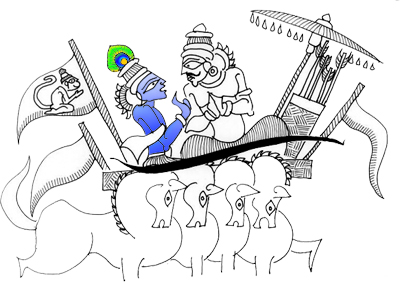 In the Mahabharata, after the city of  Indraprastha is built, Yudhishtira was crowned king in the presence of all the kings of the earth. Following the coronation, the priests asked him to honor his guests.  But the first to be honored should be the one who they respected the most. Yudhishtira and his brothers, the Pandavas, were unanimous in their choice of who should be honored first — Krishna, friend, philosopher and guide. And so Krishna was made to sit in a special seat and his feet were washed and he was garlanded and offered gifts. Thus the Pandavas expressed their gratitude. Unfortunately, the other guests took this as an insult. In paying Krishna attention, they had neglected the others. They were angry that the Pandavas chose a man who was not even king, and who was raised by cowherds, as the chief guest. They felt insulted. Surely one amongst them was more worthy. The kings raised objections, tempers flared, angry words were exchanged and finally violence broke out, resulting in a messy end to a great event.

Decisions do not exist in isolation. They are perceived differently by different people. Each one perceives it from his or her own point of view. Thus every decision contributes to the measure of one’s own value. And this can be very tricky. For what may be seen as good by one can be seen as terrible by many, a personal affront even if that is not the issue.

As the stock market collapsed, Biswajeet became very insecure. As CEO, his reputation was at stake. He had worked very hard with his team to improve the market capitalization of his small company and now this, for no fault of his, due to some strange event in Europe. Not knowing what to do, he wandered the office corridors when he met Jayant, his young and competent General Manager. They had started their career together but Biswajeet had moved ahead because he clearly had the brains. Jayant had remained a good friend. “Come, have coffee with me,” he said and took Jayant to his cabin. They spent an hour talking about their early years, being nostalgic, anything to forget the horror of the falling share prices. Biswajeet just wanted to calm down and feel normal. But his sitting with Jayant for an hour got the rumor mills working across the maze of office corridors. The CFO got annoyed: surely, he was the confidant in such situations. The COO got irritated: was this a suggestion that Jayant was being considered as his replacement? The Company Secretary was angry: why was so much time being given to Jayant by the otherwise busy CEO? Biswajeet’s team imagined all kinds of reasons for his meeting with Jayant. They felt he was signaling that they did not matter to him anymore as they had failed to achieve the desired objective. Everyone saw it from their point of view, not from his point of view. Their rage and their anger was a manifestation of their own insecurity and their doubts on the relationship they shared with Biswajeet. A tiny event triggered a crisis.