Ram and the Rooster 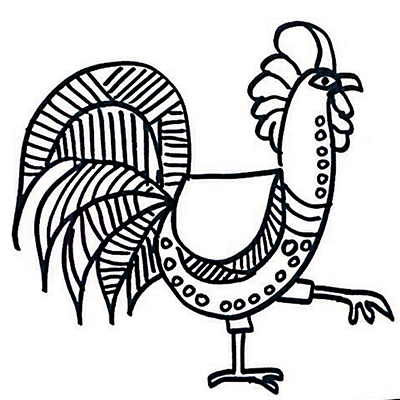 Valmiki composed the Ramayana and it is still popular though no one reads the old 2,000-year-old Sanskrit version, nor the 1,000-year-old regional classics in Tamil, Telugu, Malayalam, Kannada, Bengali, Assamese, Awadhi. What we usually access as colloquial folk versions, often transmitted orally, known as the Ramakatha. In Odisha, there have been many such local versions of the Ramayana with subplots that are unique to the region. One of these subplots involves a rooster.

In the classical Valmiki retelling, after Ram discovering that the golden deer he was chasing was in fact a shape-shifting demon, Ram returns to his hut but finds no trace of Sita. He looks around and finally stumbles upon the vulture Jatayu bleeding to death. It is Jatayu who informs him about the abduction. But in the Odia retellings, besides Jatayu, Ram meets other birds who tell him about the abduction.

In Upendra Bhanja’s Baidehisa Bilasa and Ananga Narendra’s Ramlila, a rooster tells Ram to stop crying. When he learns who Ram is, he assures Ram that his wife did not abandon him as she was tired of forest life. The demon-king Ravana abducted her and carried her off on his flying chariot, and she had yelled out his name as she was taken away in the southern direction. Pleased with this information, Ram offers the rooster a golden crown. The rooster says men who are hungry for his meat already chase him; he does not want to be chased by men greedy for gold. So he asks Ram for a skin crown instead which he gets. That is why roosters have crowns!

In Balarama Das’s Dandi Ramayana, not believing that Ram has the power to bestow a boon, the rooster asks rather sarcastically, ‘Give me a crown then!’ Ram meanwhile is angry with the mountains who do not give him any information on Sita so he curses them that their peaks will lose their crown of trees and instead a crown will appear on the rooster’s head. Lo and behold this happens! Rooster regrets not asking Ram for immortality. He runs after Ram hoping to get a better boon but by then Ram has already left for the South in search of Sita.

In another Odia story, a crane says it turned white after Sita’s tears fell on its feathers from Ravana’s chariot that flew above. Ram blesses the male crane that during the four months of the rainy season the female crane will feed it; he will have to do no work. The male crane feels everyone will make fun of him for eating his wife’s leftovers but Ram assures him that just as Sita is equal to Ram so is every wife equal to her husband and so eating her leftovers is nothing to be ashamed of. A very modern take in a traditional narrative.

Similar stories are found in other parts of India too. In one of the many Assamese Ramayanas, a gander says that Sita probably left Ram as she was tired of forest life. Angry, Ram catches its neck and as a result the neck gets elongated. These folk stories are often performed in local theatres and are as valid to the local people as the classical stories. They are all part of the vast Ramayana tradition that made Ram seem immediate, and connected him to all of India.