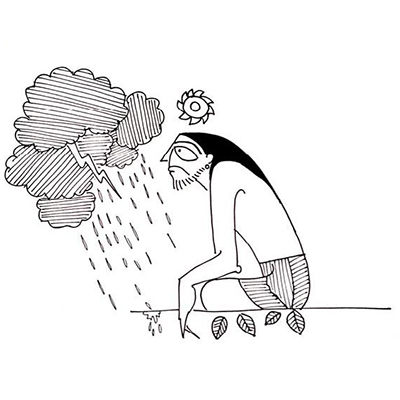 In the Tulsi Ramcharitmanas, which was composed 500 years ago in the Gangetic plains, in the Awadhi language, we find a beautiful description of rain in Ram’s own words. He speaks during the four months of the rainy season, when he is waiting for the rain to end so that he can launch an attack on Lanka. Ram talks of the season as he speaks to Lakshman and the monkeys who surround him. Sitting on top of a mountain, he looks at the rain clouds and is overwhelmed with despair. He is besieged by loneliness and misery, which he experiences because of the absence of Sita.

Tulsidas translates this description of rain and rainwater into philosophy. Ram says, firstly, clouds that do not carry enough rain move about freely. They are not stopped by the lightning bolts that fall upon them, much like an arrogant irresponsible man does not listen to the wise counsel of his parents, siblings and other close members of his family.

Secondly, Ram states how clouds, which are laden with rain have enough humility to descend towards land and touch the earth. Thirdly, he describes how the mountains are relentlessly pelted with thick raindrops and rivulets of rain, but they remain unmoved, much like a wise man, who is not affected by insults of (we can surely use the term) trolls.Fourthly, Ram speaks about how when raindrops mix with earth, they get soiled and their clarity is spent, just like a man with newly acquired riches, or a saint, who gets trapped in worldly endeavours, and is consumed by maya and loses focus.

Fifthly, Ram speaks about small streams, which break the river bank, as they fill up with water, like newly rich people who show off, and forget their limits. Sixthly, he speaks of how dry ponds collect water from rivulets and become full, like an inquiring mind acquires wisdom, when it is surrounded by the words of wise people.

Seventhly, Ram speaks of how the sea does not swell, in spite of all the river water entering it, in the way a wise man remains stable, no matter the amount of success that surges into his life.

Ram also speaks of propaganda, and Tulsidas elucidates it very beautifully. Following the rain, when there is so much grass, the once clear pathways get hidden, just as when following propaganda, the correct news is often overlooked by people.

Thus, we see Tulsidas using the metaphors of the rain to explain social realities, as well as the psychological reality of the human mind. This connection of nature with psychology is a practice that we find first in Sangam literature, composed 2,000 years ago, almost 1,500 years before Tulsidas. It is by making it appear as a conversation, via the mouth of Ram, Tulsidas bestows a certain legitimacy upon it, so that it appeals to as many people as possible.