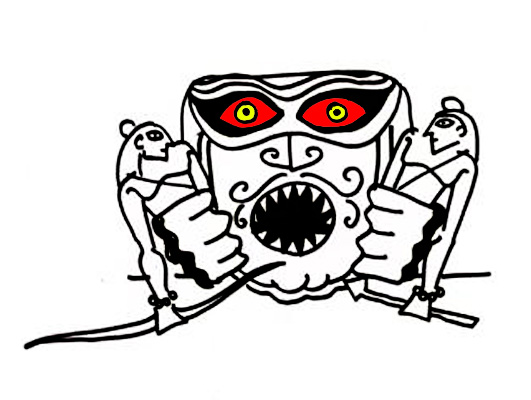 Often the words Asuras and Rakshasas are used interchangeably by most of us to refer to  demons in Indian mythology. But there is a big difference. Asuras live under the ground, Rakshasas live above. Asuras are enemies of the Devas, who live in the sky while Rakshasas are enemies of Manavas or humans. Thus the conflict of Devas and Asuras is vertical (sky and nether regions) while that of the Rakshasas and Manavas is horizontal (on earth’s surface).

Asuras helped the Devas churn nectar from the ocean of milk, not the Rakshasas. Rakshasas, say the Upanishads, were Rakshak or guardians of the forest, forests that were tamed by man and turned into fields and orchards and pastures. Is that why humans came into conflict with Rakshasas? Rationalists and anthropologists feel so.

Ramayan introduces Rakshasas as trouble making demons who prevent Rishis from performing their yagnas in the forest. Vishwamitra seeks the help of Ram to defend his hermitage against such attacks. Ram does the needful, sparing no one, not even a Rakshasa woman called Tadaka.

When Ram goes into exile he encounters many Rakshasas. The most famous of these is Surpanakha who in very plain terms asks Ram to satisfy her sexual desires and turns violent when Ram declines the invitation on grounds that he is married. Ram does not kill Surpanaka as he had Tadaka, but he allows her nose to be cut, a horrific act that leads to the abduction of Ram’s wife, Sita, by Surpanaka’s brother, Ravan. But Ravan does not stop at punishing Ram. His motivation is not merely revenge; it is also lust.  Like his sister, he too does not respect the institution of marriage. He is determined to make Sita one of his many queens.

The behavior of Surpanaka and Ravan suggests that Rakshasas followed the law of the jungle that might is right and took things by force. They did not have respect for any cultural code that gave rights to the meek and the weak. In other words they did not care for dharma. The law of the jungle that is based on domination and cunning is acceptable for animals but when humans adopt it, it becomes adharma. Being human enables us to look beyond self-preservation and self-propagation. Only humans can think about the self and care for others. This ability to care for others is the measure of civilized conduct.

One is repeatedly told in the Ramayan that Ravan is the son of a Brahman called Vishrava and a Rakshasa woman called Kaikesi, both of whom oppose Ravan’s abduction of Sita. Then there is Vibhishana, Ravan’s brother who also opposes him and Trijata who empathizes with Sita while she is sequestered under the Ashoka tree. Even Kumbhakarna, Ravan’s giant of a brother, does not agree with his brother’s policies. This shows that Rakshasas were not intrinsically inclined towards adharma. They were very much capable of abandoning the law of the jungle and adopting dharma. In other words, they were capable of becoming Manavas, humans.

Before Sita is abducted, Ram encounters a Rakshasa called Viradha. Unable to kill Viradha with weapons, Ram has him buried alive. In death, the Rakshasa turns into a Gandharva a celestial being who clarifies he became a Rakshasa because of a curse. After Sita is abducted, Ram encounters a Rakshasa called Kabanda who was struck so hard on his head by Indra, king of Devas, that it merged with his chest. With his long arms he grabs Ram and tries to eat him. When struck by Ram’s arrows, the Rakshasa begs Ram to burn him alive. When this happens, the demon emerges as a Gandharva once again telling Ram of how he was cursed to become a Rakshasa. These stories are perhaps stories of transformation. Maybe Rakshasas like Viradha and Kabanda were followers of jungle law, hence demons, until they abandoned the jungle law following an encounter with Ram and became benevolent Gandharvas.

Rakshasas occur in the Mahabharata too. They are identified as forest dwelling wild cannibals who possess magical powers. The Pandavas encounter them only in forests.  Bhima kills two of them: Baka and Hidimba, protecting villagers much like American cowboys protecting caravans from `wild’ Red Indians. Drawn by Bhima’s strength, Hidimba’s sister, Hidimbi, decides to marry him. Together they have a son called Ghatotkacha, who comes to the assistance of the Pandavas whenever his father thinks of him. He helps the Pandavas climb the Himalayas when the climb becomes too much for them.

In folk stories, Ghatotkacha is said to have helped abduct Balarama’s daughter, Vatsala, so that she could marry the man she loved – Arjuna’s son, Abhimanyu – instead of being forced into a loveless marriage with Duryodhan’s son, Lakshman. To add humor to the story, one learns how Ghatotkacha then took the form of Vatsala and actually went through the marriage rituals. When `her’ hand was given to Lakshman, the weight was so much that Lakshman fainted and Ghatotkacha laughed.

Another Rakshasa woman referred to in the Mahabharata is Jara. When king Bhismaka gave one half of a magical fruit to each of his two wives, each one of them gave birth to only one half of a full child. Disappointed, the king had the two pieces thrown in the forest. Jara found the pieces, joined them to make a whole baby and returned the child to Bhismaka who declared his son would be named Jarasandha after Jara.

Calling Rakshasas demons is perhaps a convenient rather than a correct translation. In Himachal Pradesh is a temple dedicated to Hidimbi reaffirming that Rakshasas were not demons rather guardians of the forest. Their way of life perhaps did not appeal to the heroes of the epics but it did not stop Manavas from taking their help in times of crisis.