Radha In Space And Time 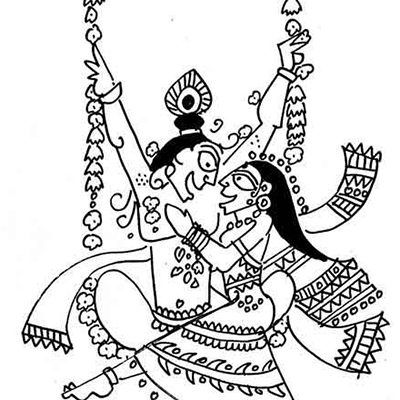 All Dharmashatras say, all traditions (riti) and laws (niti) must be subject to change depending on geography (desh), history (kala) and capability of communities (guna) involved. This idea is reiterated in the Manusmriti.

Whenever there is an issue with Islam, people will refer to the original source: the Quran, or sometimes the Hadith. Whenever there is a problem in Hinduism, people are confused as to which source they would have to refer to. All Dharmashatras say, all traditions (riti) and laws (niti) must be subject to change depending on geography (desh), history (kala) and capability of communities (guna) involved. This idea is reiterated in the Manusmriti.

Now, the simplest way of understanding this is to observe how Radha appears in the Hindu landscape over space, time and communities. In Rajasthan’s Nathdwara Temple, where Krishna is worshiped as Shreenathji, there is no Radha image placed. Nor do you find Radha’s image in Jagannath Puri temple, Maharashtra’s Pandharpur Temple, Kerala ‘s Guruvayur Temple or in Udupi’s Krishna temple. Yet, Radha dominates Krishna worship in the Gangetic plains.

Now, let us look at this from the lens of history. In the Vedas, there is no mention of Radha or Krishna. Though a cowherd is mentioned in Vedas, which are over 3,000 years old, Krishna appears predominantly in the Mahabharata which has its earliest textual records as being a little over 2,000 years old, but in this Mahabharata and in its appendix Harivamsa, there is no reference to Radha.

Radha starts appearing in late Prakrit literature which is about a 1,000 years old, but attains its fullest form in the Sanskrit work of Jaideva called Geet Govind, written about 800 years ago. In the early Puranas, like the Vishnu Purana, which are over 1,500 years old, there is no mention of Radha. In the later puranas, like the Brahmavaivarta Purana, which are less than 600 years old, Radha and Krishna are supposed to be the male and female principles, whence the whole world emerged. Thus, we see that Radha appears in the later part of Hindu history.

In terms of communities, we find that there are many Krishna movements across India but not everybody accepts Radha in the same way. For Chaitanya Mahaprabhu, Radha and Krishna were inseparable. However, in Assam where Shankardev spread the Bhagwat religion, Vaishnavism and Krishna worship, there is no sign of Radha. We find a similar thing in the Mahanubhav concept in Maharashtra where Krishna worship plays a very important role, but there is no space for Radha. In Alwar poetry from Tamil Nadu, Krishna worship is approached with passionate devotion and great importance is given to the milkmaids who love Krishna.

There is even reference to one milkmaid whom Krishna loves very much called Pinnai, who is identified as the proto-Radha, but is not seen as Radha. In fact, in South Indian temples, one never finds Radha standing next to Krishna. Thus, we realise that Radha is not found across Hindu geography, across Hindu history or across all Hindu, even Vaishnav, communities. This is very important to recognise as the nature of Hinduism. It is quite unlike Islam and Christianity, which try to homogenise their religion. Hinduism thrives on diversity and Radha becomes a case in point.

This article is also listed under Indian Mythology, Society, Vishnu