Queer Gaze for the Indian Tourist 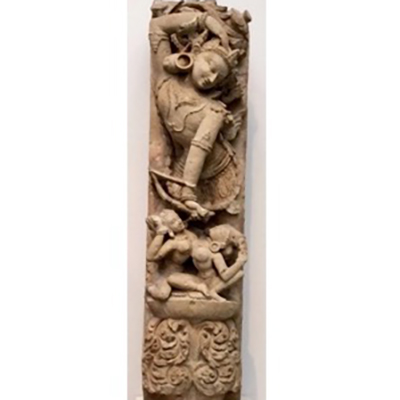 Published in June 2018, for Conde Nast Traveller’s “Desire and Discovery”.

Temple art and architecture is philosophy in stone. A manifestation of thought, temples like the hidden verses of epics, have unseen images on their walls. What you understand depends on what you want to see.

One of the most remarkable things about classical Indian languages is its acknowledgement of three genders: male, female and other. There are many words for the other: kliba, napunsaka, kinnar (in Sanskrit), pedi (in Tamil) and pandaka (in Pali). This other is translated either as ‘neuter’ (neither male nor female) or as ‘queer’ (both male and female), depending on the translator. Kamasutra refers to this as the third nature (trittiya prakriti).

There is reference to male, female and neuter/queer melodies in music; to male, female and neuter/queer rocks in texts on temple architecture. Even Tulsidas in his Ramcharitmanas, gets Lord Ram to say that he loves neuter/queer people as much as he loves men and women, plants and animals. With such comfort with people of the third nature, I often wonder if there is queer art that can be seen on temple walls? Yes, there is erotic art, the maithuna images, of men and women engaged in various sexual activities, from the romantic to the grotesque, but are there any gay or lesbian art? Where does one find them? Is there a tourist trail?

Hindu temples always have a section of erotic art. Some say this was to counter the monastic practices of Buddhists and Jains who were rivals to Hinduism; others, that they advertised the skills of temple courtesans, that these images pleased Indra and that these are desires that must be abandoned when one enters the sanctum and faces God. People travel to Khajuraho and Konark to see these images, but are disappointed to observe that they constitute less than 10 percent of the total art. And a tiny portion of that is dedicated to the queer. To find them, one has to contend with the judgmental looks of the guides. It is generally accepted that Western tourists and modern urban couples want to see these images, while ‘good’ Indian tourists avoid them. And single women interested in seeing these images are advised to be part of a group.

With great difficulty, one finds images of same-sex erotica. There is one panel in the Kandariya Mahadev temple showing two women having sex. There is oral sex between men shown in the Lakshmana temple. In the Bhoramdeo temple in Chattisgarh is a panel showing two men engaged in mutual oral sex and on the top panel of Kalleshwar temple in Bagali, Karnataka, one sees a man with a gigantic penis receiving oral sex from a man. Most of these images were carved a millennium ago, when Tantrik theology was said to be popular.

Of course, all things queer need not be sexual. There are queer images that are romantic, even funny. At Kanchipuram temple in Tamil Nadu, I saw an image of two women, half naked, embracing each other. “Lesbians?” I asked. “Just friends,” insisted the guide. “How do you know?” I asked the guide. He refused to answer. Is this how gays and lesbians are rendered invisible? Is seeking them out a ‘western’ gaze or a desire to see what is never shown, only implied?

In Seattle Art museum, USA, a spectacular stone sculpture from 11th-century Odisha shows Kama, the god of love, shooting an arrow at two women who embrace each other. This is clearly lesbian art. An image of love between two women. But there are many who rationalise these women as courtesans, who thrived in Odisha temple culture of the time, indulging in sexual acts to titillate their male customers, similar to how lesbian sex is part of male heterosexual pornography. But is it?

In Madurai Meenakshi temple’s pillared halls, one finds the image of a cross-dressing man in a feminine stance and a cross-dressing woman with a false beard. Could they be acts, cross-dressing as part of theatre? Or are they representations of characters from the Mahabharat: Brihanalla (Arjuna as eunuch during his year in hiding) or Shikhandi (Draupadi’s female-to-male transgender sibling)? It is difficult to be sure. But it reveals a comfort with cross-dressing that has long been part of Tamil folk theatre as well as culture. In fact, the oldest reference to cross-dressing comes from Sangam literature that refers to how Krishna’s son Pradyumna pretended to be a female actor to rescue his son, Aniruddha, from the clutches of Bana-asura.

At the gate of Kathmandu’s Guheshwari temple, one finds images of Kinnaras locally described as hermaphrodites, along with images of Kankala, a skeleton. These images of ghosts and queer people are part of Tantrik tradition of embracing those in society who are sidelined by pure Brahminical traditions. The most common queer image is, of course, that of Ardhanareshwara (Shiva as half a woman) and Mohini (Vishnu as a damsel), found on walls of many Shiva and Vishnu temples. But these are often explained away as allegories.
However rare, you will never find such queer images on the walls of a synagogue, church or mosque, revealing an ancient culture that acknowledged it, albeit grudgingly, as part of nature. I wish modern society celebrated theese images and made them more accessible to the world.

On a visit to Jagannath temple in Puri with my aunts, I pointed out the erotic art expecting them to react. But all they did was smile and head to the darshan. It was what they were here for. And it made me ask myself: Why should I privilege my gaze over the ones of my aunts who are devotees? Isn’t this academic contempt a form of neo-hierarchy? The gaze of Western philosophers, pilgrims, academics and tourists will always be different from the gaze of a devotee, but who gets to decide which one is correct? Whose gaze is correct and who is wrong are incorrect questions. The fact is that they are there, just like the queer rocks in temple architecture, inspired by myths, legends and religious texts.

Cultures are complex and people always look for negativity. It’s the same with temples as the gaze of the traveller changes what the temple represents. If you’re looking for it, you’ll find it.