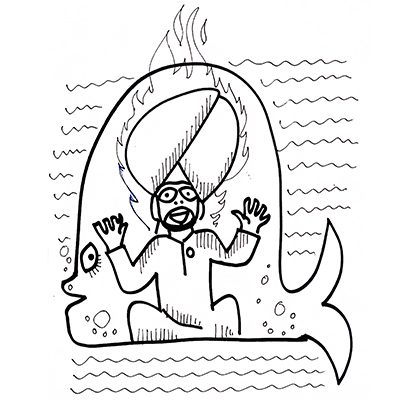 In Islamic lore, Islam is as old as creation. Allah, which is Arabic for ‘the’ God, created 1,24,000 prophets (paigambar), who encouraged all humans to follow the path prescribed by God. Of these, only 25 are referred to in the Quran, and they reveal many commonalities with prophets and patriarchs mentioned in Jewish lore.

Four of Allah’s messengers were special (rasul) as they actually carried God’s messages, in the original form. They were Musa (Moses), Dawood (David), Isa (Jesus) and Prophet Muhammad, who brought Torah, Psalms, Gospel and Quran to humanity. Dawood is associated with singing, yet in orthodox Muslim circles music is ‘haram’, against God’s law. There are whispers in Islamic occult circles of secret messages given to Ibrahim and to Suleiman (Solomon). The latter knew how to control Djinn (genie) that enabled him to build grand temples of stone overnight.

The first man, Adam, is a prophet in Islamic lore, not in Jewish lore. Adam is forgiven by Allah for eating the forbidden fruit, but told to leave Eden as his bowels now produce excrement. He is taught how to farm, how to herd cattle, how to build a house, how to marry, how to repent and how to bury the dead. We are told of his separation from Eve, Hawwa, and how the two meet at Mecca and how Adam builds the House of God (Kaabah) rebuilt later by Ibrahim (Abraham) and his son Ishmael (Ismail).

The Quran keeps referring to unbelievers. Idris (Enoch) leaves the land of unbelievers and discovers the Nile valley. Unbelievers do not listen to the appeals of Nuh (Noah), Hud (Heber), Saleh (Methusaleh), Lut (Lot), and Shoaib (Jethro). So the cities of unbelievers are destroyed by floods, sandstorms, thunderbolts, a rain of stones and fire. Of these stories, the Bible is only familiar with the tales of Noah and Lot.

The Bible refers to many fights between brothers: Cain (Kabil) and Abel (Habil), Jacob (Yaqub) and Esau, Isaac and Ismail. But Islam restricts itself to the first fight between Kabil and Habil, and does not refer to other fraternal rivalries. Instead, it speaks of the love between Ibraham’s two sons, Isaac’s two sons, even Imran’s two sons Musa (Moses) and Aaron (Harun).

The Quran refers to a unique story of the Uzair (Ezra) being killed and resurrected by Allah. He returns as a young man many years after the destruction of the Jewish temples by the Babylonians, and is recognised by his children who are now old. He shows the survivors the forgotten texts and rituals. This story suggests that the Jewish holy book in its current form is flawed, as it is lost and retrieved, and is in need of revision, an idea unacceptable to the Jewish people.

Jesus of Islam is much revered as the son of the virgin, Maryam, the only woman mentioned by name in the text. Allah always provides food for her. Palm trees bend to provide her sweet dates. Springs appear to quench her thirst.

Islamic lore speaks of Ayyub (Job) who even in misfortune does not forsake his faith, of Yusuf (Joseph) whose love story with Zuleikha becomes stuff of Persian ballads, of wise men such as Dhulkifl (Ezekiel), Ilias (Elias), Alyasa (Elisha), Zakariya (Zachariah) and Yahya (John the Baptist) who remind people to follow Allah’s law, and even Yunus (Jonah) who as in Jewish tales does not believe wicked people can change. Until his faith in humanity is restored, he travels in the belly of a whale, listening to fish praising Allah under the sea.