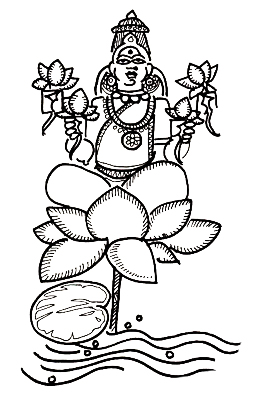 The word ‘Lakshmi’ comes from the word ‘laksh’ which means target. Inanimate objects don’t have targets: a rock has no target, the river has no target, clouds have no target, but all living creatures do have a target. All living creatures look for food; if they don’t get it, they will die. So, they have a target called food. Food, their laksh, becomes their Lakshmi. When they consume food, they stay alive. For plants, Lakshmi is sunlight, water, nutrients.

For humans, Lakshmi is not just food, it is also property. It is the clothes we wear, the house we live in, the products we consume. So, the more Lakshmi we have, the more comfortable our life becomes. So the concept of Lakshmi widens in the human world.

The ancient Vedic seers understood this long ago. They composed a song praising Lakshmi called the Shri Sukta, which is found in the Rigveda.

Lakshmi is adored so that she comes into our lives in the form of cows, horses, grain, gold and children. We find Lakshmi is considered a goddess, not just of affluence and abundance, but also of auspiciousness, in Buddhist and Jain literature. Her arrival in the dreams of queens announced the birth of a great teacher. This is remarkable as Buddhism and Jainism are monastic and reject worldly comforts. This shows how important Lakshmi was, even for ascetics and hermits.

The character of Lakshmi is elaborated in the Puranas.

The ocean of milk is the market, she is present in the market, but to obtain her from the market, we have to churn the market. We churn by offering either goods or services. Vishnu ensures the churn is coordinated well. That is the role of the king, to make sure the markets are functioning well for everyone’s benefit.

Puranas call Lakshmi ‘chanchala’. Chanchala means the one who is whimsical, you don’t know in which direction she shall move. Nobody can predict the movement of Lakshmi, just as we cannot predict the movement of the stock market, or the monsoon, if the next year’s harvest will be good, if a company will be profitable next year, if we will get a promotion or a bonus next year. Lakshmi’s movements are unpredictable. There are no guarantees in life. Nobody in the world can control Lakshmi. This concept must be remembered all the time.

This whole idea of Lakshmi being chanchal or whimsical and continuously moving is a reminder that money has value only when it is circulated. Its value comes either when Lakshmi comes into our house for the goods and services we provide, or when we give her away in exchange for goods and services.

Lakshmi’s whimsical nature is why she is also associated with luck. Some people inherit wealth. Some people win a lottery. They get wealth without effort. But she can leave inexplicably too — following a crisis, a war, an emergency, an accident.

Thus she makes us insecure. In the Mahabharata, Karna has to work very hard to become a successful man, but Duryodhana doesn’t have to work hard, because he is born into a rich family. In the difference between Duryodhana and Karna we see that Lakshmi can come wherever and whenever she wants.

During Diwali people gamble to remind themselves of Lakshmi’s whimsical nature. We need both skill and luck to win a game. A lot depends on the cards or the roll of dice — luck. A lot depends on how we use these cards — skill.

Therefore, if we want Lakshmi in our life, we have to decide if we are just going to count on being lucky or we are going to work on skills to provide the market with goods and services.