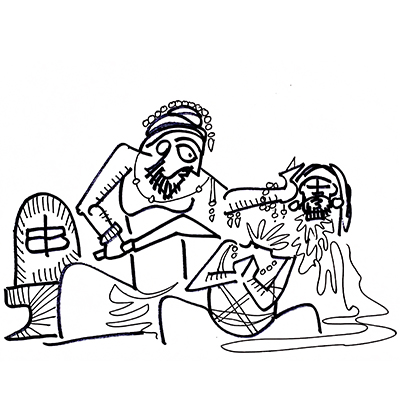 One saint gets very upset when during a famine his relatives eat rice that is reserved for Shiva worship; he kills all of them. In another story, a king cuts the nose of his wife because she smells the flower meant for Shiva. In another story, a saint cuts the hands of his wife, because she refuses to wash the feet of a servant of Shiva. In yet another story, a cowherd chops his feet for kicking the pot of milk reserved for Shiva. In still another story a warrior in battle kills himself rather than kill a man who wears the sacred mark of Shiva on his forehead. There are stories of saints who cut the tongues of men who abused Shiva and another story of a man who kills his own child and serves as food because that is what a devotee of Shiva demands; the child is resurrected later. Another sage cuts his eye to replace the bleeding eye of Shiva that magically appears on a Shivalinga.

All these rather gory details are considered to be metaphorical and not real. They are meant to satisfy the longing of people for violence and passion and direct this energy towards the transcendent emotion of devotion towards Shiva. These stories begin around 1,500 years ago, but were codified a thousand years ago. They were linked through saints to temples across Tamil countryside, where the Chola kings established their political control.

We find the idea of Shiva devotion very strongly linked to political power as well as the Tamil cultural identity. Shiva-temples were often built at site of royal burials and cremations, thus merging the king’s identity with the divine, a practice that was eventually abandoned when death was equated with impurity, as per orthodox Brahmin rules.

This rise of devotion for Shiva, who rises like an endless pillar of fire from the earth, ensured that the Jain traditions were seen as non-Tamil, something emerging from the outside while Shiva was seen as a local deity, linked to Kotravai, the goddess of war, and Murugan, the great warlord who stands atop hills. This form of devotion is unique to Tamil culture and it even spread to some Southeast Asian countries that came under influence of Chola kings and the Chettiyar mercantile community.