Palanquin for the King, or Boat for the People 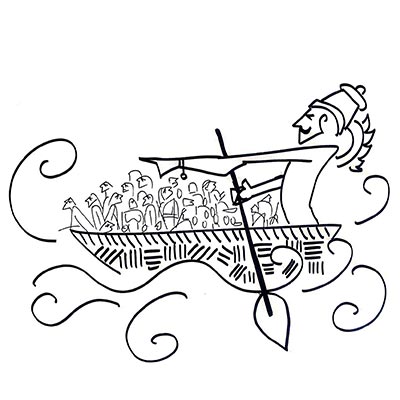 Nahusha was a great king, so great that one day the devas came to him and asked him to be the temporary king of their city, Amravati, while their king Indra was away on a pilgrimage.

Nahusha was honoured by the privilege bestowed upon him. In Amravati, he would ride on Indra’s elephant, the white-skinned Airavata. He was allowed to watch the dance of the apsaras. Gandharvas followed him everywhere, playing music for his pleasure. He sat under the Kalpavriksha, the tree that satisfies every wish. He was given the jewel Chintamani that makes all dreams come true. In time, all this luxury and power made Nahusha very arrogant. ‘I want the rishis to carry me on a palanquin,’ he ordered.

The rishis, wise old men who were highly respected by the devas, had no choice but to obey. They carried Nahusha’s palanquin and took him wherever he wished to go. Among the rishis was Agastya, a rather short man. Since he was short, he could not walk as fast as the others. As a result, the palanquin could not move as fast as Nahusha wished it to.

One day, irritated by the slow speed of the palanquin, Nahusha kicked Agastya on his head and shouted, ‘Sarpa, sarpa’ which in Sanskrit means ‘faster, faster’. But sarpa also means serpent. So Agastya cursed Nahusha to descend on earth as a serpent. Thus the king who had been chosen to rule over the gods ended up becoming a serpent crawling on earth.

Many years later, the Pandavas encountered Nahusha crawling on earth as a serpent. He caught hold of them and threatened to eat them unless they revealed to him the secret of kingship. Yudhishtira, the eldest Pandava, said, “A king must not be a palanquin that people must carry. A king must be a boat who takes people across the river of problems.” When Nahusha heard this, he released the Pandavas and was released from his terrible curse, for he finally heard what kingship means.

We live in a country where kings and leaders have long considered themselves to be palanquins that people have to carry. It is time they think of themselves as boats who help people ferry their way across the river of problems. This is not easy. For kingship or at least leadership in India is won after a long-fought battle called elections. People are divided along party lines for the sake of democracy. The land is split to create vote banks.

How does a king, who is established through division, establish a kingdom that is united? Not easy, when adding to the tempest of the already furious river, will be an angry opposition that will oppose for the sake of opposition, impatient passengers who agitate at the slightest demand for discipline, and minorities, religious and sexual, who will cling to life jackets and hope and pray their worst fears will not come true.