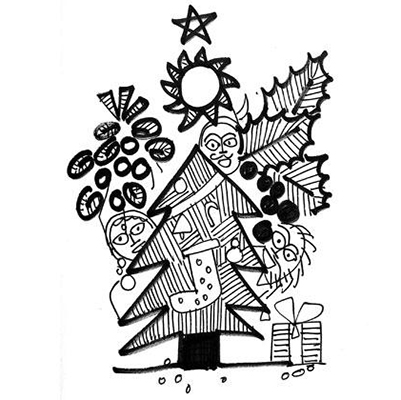 The word “pagan” was used derisively by colonial powers to refer to non-Christian faiths, especially polytheistic ones that celebrated divinity through nature-plants, animals, rivers, mountains, stars. Yet, paganism contributed greatly to what we call Christian rituals and festivals today.

Jesus lived 2,000 years ago, but his mythology (virgin birth, miracles, resurrection) emerged in the century thereafter. It was the miracle man that attracted the masses, hence the earliest images of Jesus show him as a young man with a staff (or wand) in his hand, or as a good shepherd, reminding pagans of the Adonis, the Greek god, who comes back to life each year during spring for his lover Ishtar, the Mesopotamian goddess of life, giving us the festival of Easter.

The formal Christian Church emerged when the Roman Emperor Constantine converted to Christianity 1,700 years ago. The Emperor cult was replaced by Christianity to unite the empire. Romans, once pagan themselves, actively persecuted all other faiths and mystery cults and pagan shrines. Had it not been for Pulcheria, the sister of one Roman emperors in fifth century, Mother Mary would not have achieved her venerable status given in Catholic Church (denied by Protestants) as Mother of God reminding many pagans of goddesses nursing their child on the bosom, like the Egyptian Isis holding baby Horus. Sunday became the holy day of the week as sun was sacred to many pagans, especially the cult of Mithra popular with soldiers. Christmas was brought close to the winter solstice (longest coldest night of the year), when many prayed to the sun which would gradually shorten and warm the nights.

As Christianity spread north, snow became linked to the birth of Christ, symbol of purity. Red became symbol of his blood and sacrifice. Pine trees from Scandinavia evergreen and conical, reminded all of the eternal spirit that survives death, and the trinity. Sharp leaves of holly and its red fruit reminded people of the crown of thorns covered with Jesus’ blood. The parasitic plant Mistletoe (female) clinging to Oak trees (male), popular with Celtic druids, was seen as life-bearing in the midst of death. Soft thyme leaves made the bed on which Jesus was placed at birth. Irish shamrock, a young sprig with tree leaves, became symbol of Trinity. Lavender and Rosemary were said to owe their colour and fragrance to Mother Mary who dried her wet clothes on them. Sage, holy even for Romans, was the bush that gave Mary shelter when she was avoiding Herod’s soldiers. Poinsettia from Mexico with star-shaped red leaves reminded Christians of the star that led wise kings to Jesus.

Santa Claus made the long journey from third century Turkey (where the kind and generous St. Nickolas lived), through 18th century Netherlands (where he got the nickname, Sinter Klaas, a shortened form of Saint Nikolaas), to 19th century American Salvation army (that dressed homeless people in red, with bells, to collect charity from the streets) to 19th century American permarkets (who used Santa Claus as a marketing gimmick, a “secular” God-judge who rewards good kids with toys) to 19th century American writers and cartoonists (who created the fantasy of a plump fatherly figure from North Pole dressed in red, who travels on a flying sleigh enters homes via chimneys). So powerful were these stories of “capitalist pagans” that today more children associate Christmas with shopping and Santa Claus than with praying and Jesus Christ.