Olympics Began As Tribute To The Departed 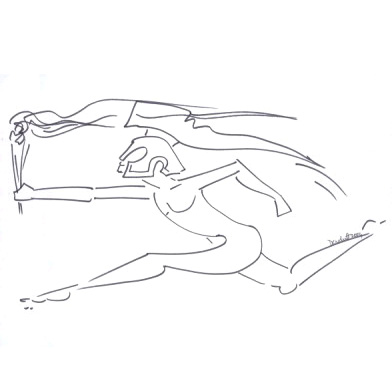 The origins of the Olympic Games can be traced to a competitive sport played as tribute to dead warriors. Homer’s Iliad mentions that Achilles held funeral games on the shores of Troy in honour of his male lover, Patroclus. Games were also held to celebrate the killing of a foe. The Pythian Games celebrated Apollo’s slaying of the Python. The Nemean games celebrated Hercules’ killing of the Nemean lion.

There are a number of possible explanations for the practice of funeral games. First, it honoured the dead warrior by re-enacting his military skills. Second, it served as a symbolic affirmation of life to compensate for the loss of a warrior. Third, it was an expression of the aggressive impulses that accompany rage over the death. Perhaps they are all true at the same time.

The ritual nature of the ancient Greek games and their association with death, war and victory suggests that these were organised ceremonies held to enable a people to come to grips with the eternally present fact of death. It was, after all, a time of high infant mortality, death by diseases that we are now in control of, and it was also a time of almost incessant warfare.

The origin of the Olympic Games, according to Greek mythology, is also enmeshed with death, war and victory. The most common story was carved on the walls of the Temple of Zeus at Athens. Oinomaos, king of Pisa, challenged young men to a chariot race promising them his daughter Hippodamia’s hand in marriage if they won, provided they were willing to be beheaded if they lost. Many young men came hoping to win and marry but they all lost and were killed, for the horses that pulled Oinomaos’ chariot were celestial, the horses of Ares, God of War.

Pelops defeated him using the horses of Poseidon, God of Sea, and a bit of cheating, getting the royal stable keeper, Myrtilos, to replace the bronze axle of the royal chariot with one made of wax. During the race, Oinomaos’s chariot fell apart, Oinomaos died, and Pelops was declared winner. Pelops married Hippodamia and instituted the Olympic Games to celebrate his victory and honour the memory of his deceased father-in-law, Oinomaos, and all Hippodamia’s suitors who had died early. By being fair in the game, the athletes honoured Zeus, king of Greek gods, and keeper of the balance of universal justice.

Herakles regulated the games Pelops had instituted. During the games Herakles taught men how to wrestle and measured out the stade or the length of the footrace, from which comes the term ‘stadium’. Herakles honoured the victors with wreaths made of branches of the wild olive tree, which he had brought from the magical land of the Hyperboreans.
The name ‘Olympic’ was a reminder to all mortals that the first games where death/war/victory were honoured were organised on Mount Olympus, home of the Greek gods. It was held to mark the death of Cronos and the victory of Zeus over the King of Titans. During this game Apollo, the Sun God, beat Hermes, the Messenger God in the footrace, and Ares, the War God, in boxing. As a result Apollo, the embodiment of Greek male beauty, became the patron of all sport and the Olympic Games in particular.