Of Thrill-Seekers and Deer Hunters 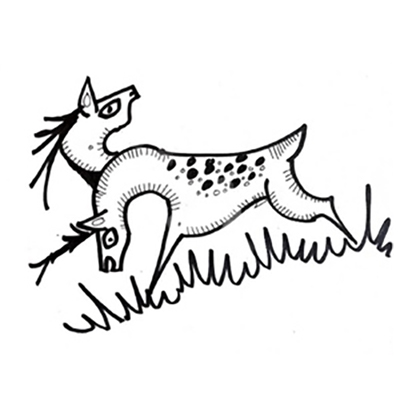 In the forest, chasing the deer (mriga) creates a path (marga). Hence in Vedic texts, deer embodies a goal: the object of desire. In the Manusmriti, kings are warned not to indulge too much in deer sport. In ancient India, hunting deer was a major pastime and the kings would spend a lot of their time in the forest, enjoying the thrill of the chase, rather than focussing on boring governance, like politicians preferring the thrill of elections to the mundane world of administration, and CEOs chasing the next acquisition rather than building resilient systems.

In Vedic traditions, Rudra raises his celestial bow and shoots the antelope. This pins the antelope to the sky stopping him from chasing the female deer. The male deer is said to be Brahma and the female deer is supposed to be the goddess whom he creates. This pinning of the male deer in the sky as he chases the female deer is seen as a metaphor for yoga, and stilling the restless mind. In fact, the frightened female deer, takes shelter in the palm of Shiva’s hand. But on a more mundane level deer hunting revealed the very opposite of stillness. It showed the agitated minds of the thrill-seeking kings. This is much like those who spend time on gamified dashboards instead of nurturing talent.

The deer is also associated with erotica. Vibhandaka Rishi sees the female deer, some say she is an apsara in the form of a female deer and spills his semen. The female deer eats the semen and becomes pregnant. Thus Rishi Shringamuni, the sage with deer horns, is born. Thus deer is the object of desire, seducing even the uninterested.

A deer hunt is a recurring motive in Hindu mythology, foreshadowing trouble. Ramayana begins when Dashrath goes on a deer hunt and accidentally kills Shravan Kumar, the only child of old blind parents. For this crime, Dashrath is cursed, that the separation from his son will be the cause of his death. In the Mahabharata, Kindama Rishi and his wife make love in the form of a deer when Pandu shoots them. For this crime, Pandu is cursed that he can never ever touch his wives sexually again. if he makes love to his wives, he will die instantly. Thus, both the Ramayana and Mahabharata begin with the deer hunt. Even the story of Shakuntala’s romance begins with King Dushyanta going on a deer hunt.

In the Ramayana, during his fourteen-year exile, Ram hunts the Golden Deer on Sita’s request. The vegetarian insists that Ram was not trying to hunt down the deer but capture it and keep it as a pet. However, the Ramayana is very clear that Ram and Laxman did a lot of hunting of deer. They use the pelts as clothes and gifted them to sages. They used the bones for weapons and meat for food.

But the Ramayana also has stories about Sita telling Ram not to kill deer for sport. She says an excess of hunting affects the population of the animals. So, she is speaking about conservation in the forest. This idea recurs in the Mahabharata where Yudhistira and his brothers are hunting in the forest during the exile. The deer appear in their dream and beg them to go to a different forest. The deer state that their population is dwindling. If the brothers continued hunting, the deer population would come to an end. If the deer population comes to an end that means that the tigers would starve as they have nothing to eat. The grass would overgrow and prevent the growth of other plants. Thus, the ora and fauna depend on a healthy balance and one cannot kill all the deers. This idea in the Ramayana and the Mahabharata shows a very strong ancient ecological understanding of animal life.

In art, many times a two-headed deer is shown. This deer cannot be hunted because while one head eats grass, the other keeps watch for potential predators and hunters. Such images are food in clay seals of Mohenjo-daro. It is deer that defies the hunter. The target that will never be achieved, always out of reach of the CEO.