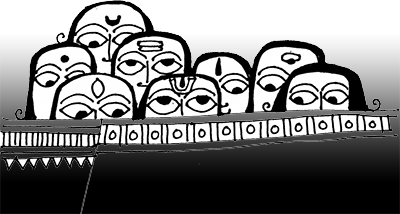 I am a German who heads an European auto parts company in India. While I like working in India I find it difficult to comprehend the lack of respect for rules, regulations, and processes. The ‘flexibility’ doesn’t fit into the european company culture so that leads to misunderstanding and awkward situations. Can you help me understand this trait and maybe I will be able to empathise better with my workforce?

We all believe that our way is the right way. It is only human. What we forget is our way is influenced by the culture we have been raised in. And every culture is different. We would like to believe that in modern times, we need to have a common homogeneous culture based on science, but this is based on the erroneous assumptions that humans are rational. We are not.

You come from a culture that values one truth. Once upon a time, this one truth came from the royal or religious authorities, who claimed they had access to a divine force that stood outside human imagination. In the Roman Empire, this came from the Senate via democratic processes. In the Holy Roman Empire, it came from God. In the post-Renaissance world it came from scientific principles, which, willy-nilly, endorsed pre-Christian Greco-Roman ideas. Whether it was the Roman Army, or the Jesuit Missions, efficiency was the key word. Every rule, every measure and every authority was designed to achieve the goal.

But that is not the history of India. Here the world has been rather different. Kings have come and gone — influenced by Persian, Greek, Central Asian, European — models, but a greater force has been at work. The village, which acknowledged the existence of many truths, and the relative value of one truth in a context. There were the priests who were on top of the purity pyramid. There were landed gentry who were on top of the political pyramid. There were traders who were on top of the economic pyramid. So multiple pyramids existed, and depending on context, different people dominated the village — the merchant, the landed gentry and the priest. The king was not all-powerful like the kings of Europe. He could not interfere in matters related to jati or caste. Indian feudalism was not a clean pyramid like in Europe; here the feudalism varied from region to region, different jatis calling the shots in different regions. For example, there were villages where the weaving community ruled the roost and there were villages where hunters were in control.

The British could not explain this phenomenon and even today academicians explain it in simplistic terms like Brahmanical domination. It is far more complex. For the sake of simplicity, we can say while Europe has been monotheistic (one God, one king, one rule), India has veered towards the polytheistic (many Gods, many kings, many rules). We are not so governed by central authority. Instead, several peripheral authorities negotiate with each other to create the ecosystem.

Which is better? With Euro-American domination of world economy, we are told by every educational institution that the Western singular-linear way is better. We endorse its validity by saying it is based on scientific principles. We impose it in India and find resistance, because the culture is wired very differently. Here, every God is demanding attention. It is not a case of efficiency; it is a case of diversity.

So to get your way — communicate with the many gods of your team. Not emails, but personal conversations. The more meetings you can have the better it is. Not town halls, but small group meetings. Listen to them, make them feel they are valued, and rather than demanding compliance, request compliance. Make sure you remind them from time to time that you are boss, lest they see your empathy as weakness. This will go a long way in getting them to be flexible enough to align to your way, with little friction.