No, It’s Neither a Sin Nor Un-Indian to Drink Alchohol 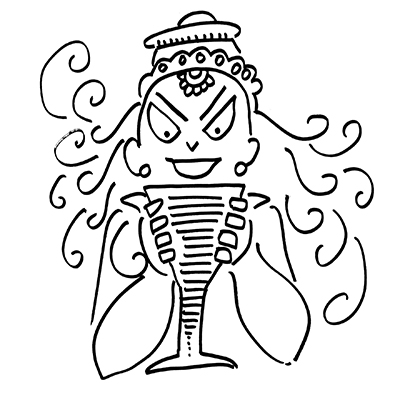 There are two types of alcohol. One produced by fermenting flowers, fruits and grain (Desi Daru). The other produced by distilling (English Daru). The former was produced in kitchens across India for thousands of years, offered to the many villages gods and goddesses, before the rise of hermit traditions such as Jainism, Buddhism, Vedanta, and Vaishnavism that frowned on intoxicants. The latter needed special equipment and was popularized by the British as it was easier to tax and became a major source of state revenue.

Almost every faith balances indulgence with restraint, feasting with fasting, periods of intoxication with periods of sobriety. Egyptian gods loved beer, Greek had god called Bacchus who discovered wine, Vikings loved to drink mead with their gods. In India, alcohol and intoxicants were part of the pleasure principle called bhoga while restraint and withdrawal was called yoga. The former is embodied in the apsara or damsel who holds a pot of intoxicant in her hand, and the latter embodied in the tapasvi or hermit who shuts his eyes to all pleasure. This balance was lost when alcohol is produced for profit and pushed through advertising.

When Muslims arrived in India, there were not averse to the pleasure, as they saw Jannat, the paradise of believers, as a place of indulgence for the faithful. They resisted alcohol fiercely, though the metaphor of the wine-serving boy played a key role in Sufi mystical poetry. This imagery can be traced to Ganymede, the boy-lover and cupbearer of the Greek god-king, Zeus, which was very much part of Persian culture. The Europeans loved wine, thanks to their Greco-Roman foundations. Even Jesus turned water into wine, and was admired for it, in ancient times. But the Church was anti-pleasure and anti-sex, and the Heaven of the Bible was an austere puritanical space, unlike the Jannat of Muslims which was full of flowers, fruits, fountains, and beautiful fairies. Muslims were pro-pleasure but anti-alcohol, Christians were pro-alcohol but anti-pleasure. By the 21st Century, Hindu elite decided the only way to appear even more pure and pious was become anti-pleasure and anti-alcohol. So the dancing girls of India, creators of art and music, were deemed prostitutes and their legacy wiped out. And alcohol became luxury to be taxed brutally, seen as a vile fluid that destroyed homes. The restrictions and disapproval made pleasure even more desirable, something to express rebellion, subversion, defiance and even heartbreak. It was glamourized in songs and poetry.

Yet intoxicants have been part of all tribal communities where its consumption is carefully regulated through ritual. Tribal communities have always known how humans get stressed and anxious and bored and need the help of fermented fruits and flowers to calm down, and experience fantastic realities. Alcohol was consumed, but only after it had been given to the gods. Not just alcohol, other chemical stimulants too, such as cannabis, tobacco, opium, all in measured doses, in festivals, in ritually prescribed ways.

These tribal practices seep into what we now call mainstream Hindu rituals. Rig Veda is full of hymns describing the ritual of preparing and offering Soma to Indra via the fire-god Agni. This Soma is an ephedra-like plant, one that enhances your mood and energizes you. Indra consumed it and went to war, much like the alcohol given to soldiers and elephants of medieval Indian armies before they charged into the enemy, overcoming all fear. Alcohol was a necessary part of war, when you have to get humans and animals to charge an enemy armed with sticks, stones, axes, spears, swords, and hot oil.

Varuni, the goddess of wine, was daughter of Varuna, god of sea, that was churned by the Devas and Asuras using a mountain as a churning spindle and a snake as a churning rope. She emerged with other treasures of the ocean including Lakshmi, goddess of wealth and fortune, and other symbols of authority, affluence, and abundance. These were taken by Indra to his paradise, Swarga. Here Indra would drink wine and watch the apsaras dance and the gandharvas sing. Since he loved drinking, he was called Sura and his enemies came to be known as Asuras, those who had no access to the celestial intoxicating drink.

But as he consumed more and more of Varuni, Indra became increasingly unstable and weak and complacent and lost control over Swarga which would be overtaken by the Asuras. Indra would then become a yogi, appeal to the higher powers, and regain his splendour, and drinks, and the cycle was resume. From the bhoga following victory to the yoga following defeat.

Alcohol is a key offering in Tantrik practices, offered to Bhairava and Bhairavi, the fierce form of Shiva and Shakti. This was given along with meat. This was royal offering across India, until the rise of Vaishnava practices that shunned alcohol. But even in Vaishnavism, Krishna’s elder brother Balarama, often identified with Shiva himself, is shown as fond of intoxicants made from the Tada (Palymra) plant. That is his symbol. He also loves Bhaang (Cannabis) too and his wife is the celestial Varuni herself, depicted in art with a pot in her hand and a drunken happy expression. The separation of alcohol and other kind of intoxicants is usually not made in ritual ceremonies. They are all seen as mind-altering substances part of connecting with the spiritual realm.

Politicians know the power of religion. It gets them votes. So they create new religious ideas and practices that serves their purpose. With their control over media, the politician makes himself the shaman and the priest who tells the tribe what good conduct is and what is bad. For the labourer, the only escape from the harsh reality of life is often drugs and alcohol, often small doses to help him sleep better and handle the pressures better. But in a commercial capitalist world, where alcohol is being actively pushed by businessmen, and taxed by the state, the ritual regulation is lost. Addiction follows. The burden of his addiction is borne by his wife and his children, and politicians are forced to step in, blaming alcohol rather than capitalism, denying India’s vast and diverse and dynamic ritually-regulated intoxicant heritage.