No fish for Gauri this year? 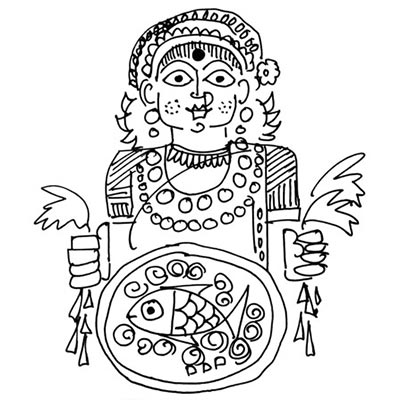 Every year, as the rains wane, many families across Maharashtra bring the image of the Goddess as Gauri into their homes to sit alongside Ganesha, who is brought in a few days earlier. She comes dressed in fabric and bangles as green as the countryside. All rituals of Gauri are conducted by women. It is they who carry her around, bedeck her, feed her, dance and play around her to make her happy. The idea being that the Goddess has come to her mother’s house (maher, in Marathi) to have some ‘me time’. A similar theme underlies the Durga puja in Bengal, Odisha and Assam, held a few weeks later.

Gauri is seen as a milder form of Kali, which is why she wears a saree and ties her hair with a string of flowers. Sometimes, she comes as a single woman, and sometimes in a pair: the Jyestha Gauri (elder Gauri) and Kanishtha Gauri (younger Gauri), who are identified sometimes as Ganesha’s mothers or Ganesha’s sisters, or just friends. They are occasionally identified as Mahalakshmi, who is not so much Vishnu’s wife but rather a local form of Durga, who is Shiva’s wife. These rather untidy myriad oral explanations indicate that the ritual is locally rooted and organic to the community; a ceremonial household expression of emotion, not based on any particular scriptural injunction.

This ceremony is also conducted by the fisherfolk of Mumbai, the Kolis, one of the oldest inhabitants of the islands that make up this city. What is unique about the Koli celebration is that they offer Gauri her favourite food, and theirs: fish and prawns and crab, the best of their catch, cooked in rich spices. This is not offered to Ganesha, Gauri’s son, who is generally seen as a vegetarian god.

Likewise, in Bengali Durga pandals, fish and meat and egg are served. Every devotee looks forward to it. But for Jagratras during Navaratri for Mataji, her Punjabi devotees turn vegetarian. Kashmiri Pandits also offer meat to the Goddess, though not at Vaishnodevi, who being ‘Vaishnava’ is vegetarian! All this indicates the complexity and plurality and negotiated boundaries of Hinduism, currently under threat from Hindus who aspire to make it homogenous, doctrinal and curiously vegetarian, ignoring the food habits of many brahmin and non-brahmin communities.

In the new caste hierarchy that is emerging in India, vegetarians are aspiring to sit on top of the pyramid. The non-vegetarians are seen as belonging to the bottom. Pork and beef consumers are way below. The division is rationally explained by speaking of animal rights, which gives the ‘upper’ group moral high ground to oppress those at the bottom. But there is a more irrational explanation that is often ignored – the monastic (or is it brahminical?) revulsion for blood. Those who dealt with blood – the soldiers, the doctors, the butchers, even farmers (who castrate bulls and kill earthworms and rats) – have traditionally been seen as inferior to the pure ones, untouched by blood.

This revulsion of blood is the reason why women who are menstruating, or at the time of childbirth, are seen as impure and not allowed to enter the kitchen. The creative rationalisation? ‘Women need the rest.’ This ‘bleeding’ is the reason why men are located on top of the gender pyramid, and why celibate men, who do not ever deal with women’s secretions, are even higher.

As Gauri enjoys her fish, and the women sing and dance around her, I wonder if she cares for the pollution rites, moralities and hierarchies imposed by male celibate ascetics. Does she not always prevail, as the blood-drenched Kali?