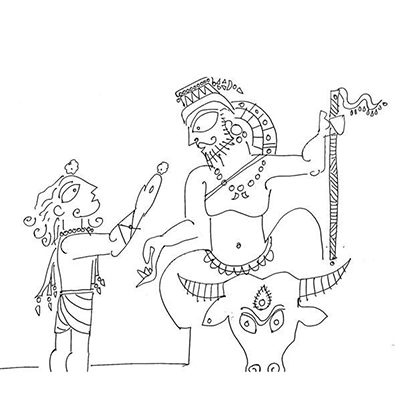 The story of Nachiketa comes from the Upanishads, so from 2,500 years ago, essentially, belonging to a period in history when the theories of karma, rebirth and liberation, were being slowly consolidated in the Indian subcontinent. Nachiketa was a young boy who observed his father donating cows to secure himself a place in heaven. However, his father had cows that were old and could not bear calves and give milk. Nachiketa felt that if his father kept offering such mediocre cows as donations, he would never get a place in heaven. In his innocence, Nachiketa asked his father if he should not give something else he possessed instead, something of greater value – Nachiketa, his own son.

His father ignored his son at first because he felt Nachiketa was mocking his poverty. But, when Nachiketa persisted and kept offering himself as a substitute donation to the cows, his father got upset. He shouted at Nachiketa that he would indeed donate Nachiketa and would do so to the god of death. At his words, this truly happened. Nachiketa was transferred from the land of the living to the land of the dead immediately, to the horror of his father.

When Nachiketa reached the land of the dead, he waited at the door for Yama, the ruler of the land of the dead. When Yama finally arrived, and found the boy waiting, Yama asked, “Why are you here? As per my book of records, you are not supposed to die for several years.” Nachiketa explained how his father had donated him to Yama. Yama felt sorry for the young child and bad about the situation that had brought Nachiketa to the land of the dead. So, he asked Nachiketa to ask for any boon he desired and Nachiketa asked a very simple question: “Is there life after death, or is death the end?”

Yama said it was a very difficult question to answer, even the gods were not sure of the answer. Yama talked then about two theories of life: the first being a life full of sensory indulgences attached to material things after which we keep getting reborn, because we are obliged to repay the debt of previous lives’ indulgence. The second being a life in which we restrain our senses and do not get attached to the material world. In so doing, we break free from the cycle of debt and attain moksha, being no longer bound by death.

Nachiketa’s story, spoken via the mouth of the god of death, attains a kind of legitimacy. Nachiketa returns to the land of the living, enlightened by this great knowledge about what happens after death. This idea of rebirth forms the cornerstone of Indic mythologies and informs Hinduism, Buddhism and Jainism. It differentiates Indian mythologies from mythologies of other parts of the world.

This structure – a god giving knowledge to a mortal – is a consistent theme in Hinduism. The most popular being Krishna giving knowledge to Arjun in the battlefield as the Bhagavad Gita, but in a far more elaborate way. Of course, the Bhagavad Gita is composed much later, but in it, Krishna keeps referring to his knowledge, which is eternal and has always existed, clearly referring to the old Upanishadic traditions.