Mythology of the Undead 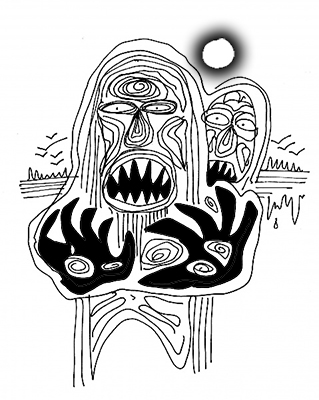 I wondered why India’s first overtly Zombie film was based in Goa. Perhaps, (and this is pure speculation), because zombies can only exist in lands where the dead body is preserved after death, interned in tombs and burial grounds, as in a land with a very high Christian or Muslim population. Goa fits the bill with its high Catholic population (Mercifully, no one protested). If you burn the body after death, then there is no corpse that can go around wandering the streets troubling the living. There can be no zombie.

The popularity of Zombie and Vampire movies in America and Europe, does have its roots in local practices such as embalming and entombing related to disposal of the dead and the belief that the dead wait in purgatory, until the day of Final Judgement, when all the dead shall rise, face the Messiah on the Day of Rapture, and either go to Heaven or Hell. If one goes to Jerusalem to the Mount of Olives one finds thousands of tombs of faithful buried there over the centuries awaiting the return of the Messiah.

The idea of Zombies comes from West African tribes and Voodoo practices that enabled a sorcerer to animate a dead body and make it do his/her bidding. The animated corpse has no conscience, consciousness or self-awareness. It is like a robot, following its master’s instructions.

In ancient Egypt, to be alive, one needed not just one’s body but also one’s name, one’s shadow, one’s personality and the spark of life. Theoretically, a sorcerer could control a man after his death by denying him or her access to his/her name, shadow, personality or spark of life. Thus it was possible to control the body of the dead, not let them move on to the land of the dead.

In her famous novel, Frakenstein, Mary Shelley explores the scientific belief that the body is like a clock and death is simply a problem with the clock. A scientist, theoretically could restore the clock and bring the dead back to life. In doing so, the scientist resurrects a dead man, but he has consciousness and self-awareness and he demands from the scientist a companion.

The idea of the undead became popular with Bram Stoker’s famous novel on Dracula where the dead come back to life. But the one who comes back to life is not quite alive and sustains itself on the blood of the living. This undead vampire or vampyr is described as beautiful and sexual, trapped in time, devoid of a conscience, hence incapable of kindness, a devil incarnate, an anti-Christ. But for generations, young women, and men, have imagined themselves as capable of invoking love in this terrifying outsider. The famous ‘Twilight’ series that has teenagers giddy in love is the latest in this saga. Unlike flesh-eating rotting zombies, the vampire is more sexy, more desirable, more romantic and dangerous than frightening.

One cannot appreciate vampires and zombies without appreciating biblical mythology, and the ritual of burying in disposing the dead. One reason why these films are difficult to remake in Hindi. Another reason why Zombies in India are located in Goa, not Gaya or Kashi. If there is no flesh, then the dead cannot be undead.