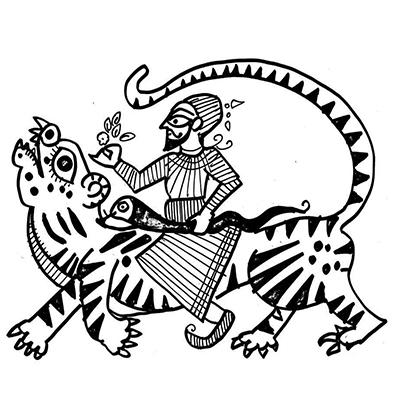 Islam reached Bengal somewhere in the 13th century. Mongol raids forced migration of Sufi Pirs, also known as Ghazi, from Iran via Delhi. They spread their faith, in regions that were far away from mainstream, where Hindu as well as Sultanate influence was sparse. These were lands recently exposed and populated, following the shifting of the Padma River. The holy men brought not just faith but also technology such as the water wheel and legal expertise, which enabled communities to be built around them. Hagiographies of these saints reveal much about their influence on local people.

Dhaka’s International Airport is named after one such pir, Hazrat Shah Jalal. The Muslim king of Lakhnauti, Firuz Shah, was in conflict with the Hindu king, Gour Govinda who knew magic. So Firuz Shah sought the help of Shah Jalal, who lived at that time in Mecca. Firuz Shah begged Shah Jalal to shift from the higher spiritual jihad he was pursuing to the lower, material jihad and overpower the infidels of India. Shah Jalal agreed and began his journey to India with his followers (313 of them, same number that enabled Muhammad to win wars and return from Medina to Mecca). On his way, Gour Govind caused a rock to roll on his path. But, Shah Jalal said, “shila hat” or “rock move”, and it moved away from their path. This is how the town named Sylhet came into being. When he reached a river, there were no boats. So, he and his followers sat on their prayer mats, which turned into flying carpets and carried them across. That he flew into what is now Bangladesh, is why the airport is named after him.

Another story is of Ismali Ghazi Pir. He defeated the Gajapati king of Odisha and also fought the king of Kamroop Assam. But then, the king doubted his loyalty and had him beheaded. But, his head continued to talk, and his headless body continued to fight. His body was cut multiple times as he became a martyr. Six parts of his body were buried in six different places. These became holy shrines; people were told visiting them was equal to visiting Mecca. This belief reminds us of regional Hindu pilgrimages that confer merit equal to visiting Kashi or bathing in Ganga. The cut body of the sage reminds us of the multiple shrines of Shakti, built where pieces of Sati’s corpse fell, and of many places where Buddha’s relics were buried by his followers.

Some stories say that Allah created many pirs and paigambars before Prophet Muhammad, which included Ram and Krishna and Chaitanya. Then came holy women like Bon Bibi and other Muslim saints from Mecca who controlled tigers, snakes and crocodiles and helped people settle in the Sundarbans. Local cultural influence is obvious. These stories, much like mangal kavyas of Bengali Hindus revolving around local deities like Mansa, are unfortunately suppressed by elite educated Muslims, who prefer masjid-based institutional Islam based on Quran and Hadith to dargah-based popular Islam based on charismatic holy men. It reveals the class divide, as well as the discomfort with diversity and regional adaptations of the faith.