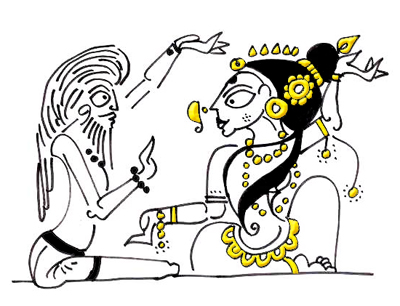 I recently met a gentleman whose family tree traces itself to the 8th century philosopher and scholar, Mandana Mishra of Mithila, Bihar. Not many of us have heard of Mandana Mishra, or his amazing wife, Ubhaya Bharati. But their story opens up for us an India, extending from Kerala to Bihar to Kashmir, where intellect was celebrated along with sensuality. Very different from today’s India where spiritual gurus are embarrassed to talk about sex and sexy sirens are not taken seriously when they discuss anything intellectual.In the 8th century, a young man from Kerala called Shankara (now known as Adi Shankaracharya, the first teacher called Shankara) refused to marry. Instead, he became a monk and traveled across India determined to bring back the people’s faith in Vedic thought, using words and logic as his weapons. He had two major opponents. The first was Buddhism, which rejected the idea that the Veda is the source of the truth. The second was Mimansika, which celebrated the idea that the Veda is the source of truth, but insisted it can only be realized through ritual, not discussion. Buddhism was a monastic order. Mimansika, however, favored the married life for unless one is married one is not allowed to perform Vedic rituals. Shankara was a monk like the Buddhist but he favored the Vedic thought like the Mimansikas. Thus he embodied a new approach.

Shankara went to Kumarila Bhatta, who had successfully challenged many Buddhist and Vedic scholars to become the most revered Mimansika. But Kumarila was dying. So Kumarila directed him to Mandana Mishra. “You will know his house when you find there caged parrots discussing such abstract concepts such as is the Veda self-validated, is the world a reality or a perception, is it karma or God that brings about results!”

Like Kumarila, Mandana was a ritualist and a married man. He was at first annoyed to see a celibate monk. He eventually relented and all the scholars of the land gathered to watch Mandana Mishra debate against Shankara. The difference between the two was stark: Mandana Mishra was older, married and a believer of rituals. Shankara was young, celibate and believed in philosophical speculation. Who would be the judge? Everyone agreed none was more suited for the role than Mandana’s wife, Ubhaya Bharati.

When Shankara returned he bowed to Ubhaya Bharati who was Saraswati, goddess of knowledge, to him. And Mandana Mishra bowed to Shankara and described him as the mythic hermit, Shiva, who had beheaded Brahma, father of rituals. From that day onwards, Mimansa was divided into two schools: the old ritual school of Purva Mimansa and the new intellectual school of Uttar Mimansa. This later school evolved into what is today called Vedanta, acme of Vedic thought.