Mouth of the gods 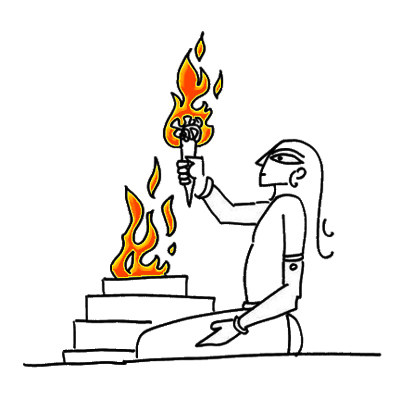 His name is the first word of the first hymn of the Rig Veda, making him the most ancient and most important of Vedic gods. He is Agni, the fire-god. There he is described as the lord of the sacrifice and the bringer of wealth, because it was fire that connects the realm of man (earth) with the realm of the gods (sky). Its smoke rises up and takes the offerings of man, the hymns and the oblations, to the celestial realms. Naturally Agni was an important god — the mouth of the gods, the messenger, the intermediary between the temporal and the celestial.

Agni is visualized with two hands, two heads and three legs. He has seven fiery tongues with which he licks sacrificial butter. He rides a ram and is usually red in color. He is Indra’s twin and in the Veda second only to Indra with 20% of the Rig Vedic hymns dedicated to him.

There were many fires discussed in Vedic times. There was the fire that burns in the forest, wild and free. There was the domestic fire for cooking food. The sacred fire produced in the sacrificial hall. The fire used to burn dead bodies and garbage. There was fire in the belly that digested food. And finally fire that is located under the sea, spat out by a submarine mare known as Vadavagini that causes mists and clouds to form. This fire of the submarine mare prevents the sea from overflowing. But one day, it will escape and burst forth as volcanoes. That day will be Pralaya — the sea will overflow and consume the earth.

Since a fire drill was used to light fire, the two sticks of the fire-drill were in ancient times considered the parents of Agni. One stick served as the ‘mother’ into which the other stick, the ‘father’, was drilled clock-wise and counter-clockwise, like a churn used to make butter. Since the hands were used to help the father-stick drill into the mother-stick to create fire, the ten fingers of the hand were known as the maids of Agni. The oblation given to fire during a homa was Svaha, his wife.

Fire plays a special role in human life. Humans are the only living creatures on earth who have tamed fire. We can create it, we can put it out, we can control it, even though we fear it. And this is what differentiates us from plants and animals. This is what makes us human. Plants are helpless before fire. Animals are afraid of fire. Only humans use fire to cook food. We use fire to burn forests, clear the land and establish fields and villages. We contain fire in the sacrificial altar, in kitchens, in torches and most importantly in lamps.

The Agni in a lamp is the most domesticated form of fire. It is a single gentle flame standing still, like a Rishi in tapasya, emerging from the wick of the lamp. This makes Agni of the lamp the most auspicious form of Agni, to be contrasted from the inauspicious wild forest fires with a hundred thousand flames moving unbridled in every direction. In between these two extreme forms of fire are other domesticated forms of fire — bonfires which are lit in festivals such as Holi and Lohri, fires that are lit in the kitchen to cook food, fires that are integral to the Homas and Yagnas of the Brahmins, fires that are used to light the corridors of the path that we travel on, at night.

Lamps therefore are associated with the Goddess Lakshmi. Just as domesticated land (the field) offers food, domesticated fire (the lamp) offers good luck and fortune. It creates around it a bright and warm circle of light in which one can sit and pray and study and feel safe. It is in this space that Lakshmi resides. In the festival of lamps, a lot of lamps are lit especially in the front of the house so that more light spaces are created to attract Lakshmi.

Traditionally, if a lamp goes out on its own when there is still enough oil, it indicates bad luck, for it means that though man thinks he has domesticated fire, forces greater than man (god? demon?) reject this domestication. They communicate by making the flame flutter and then putting it out completely. The form of the flame in a lamp thus is indicative of fortune. Great pains are taken to ensure the lamp light is still burning until the last drop of fuel in the lamp is over.The Lamp has thus become in India almost a metaphor for life itself,which needs to be tamed and also needs to be protected.