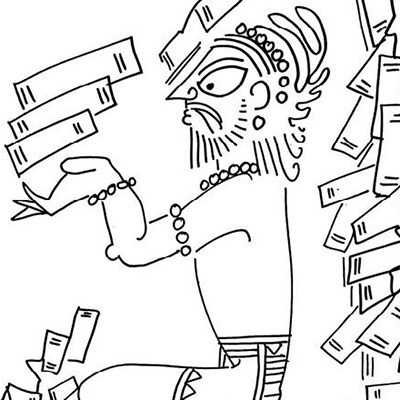 The Brahmanas (religious texts) refer to manuals that connect Vedic hymns (mantras) to rituals (yagnas) and offer explanations for the various ritual practices by way of stories. These stories can be dated back to roughly 2,800 years ago, so before the time of the Buddha. Through these, we get a sense of the ideas that existed in India before Buddhist times.

One such story is the story of the sage Bharadwaj. We are told that Bharadwaj lived the celibate and pious life of a brahmachari and that he could recollect three of his lifetimes. In each of these lifetimes, he spent some time studying a Veda each. At the end of his third lifetime, Indra appeared before him and asked him what he desired. Bharadwaj said he wanted to live one more life so that he could complete his reading of the Vedas, suggesting that he was aware of four Vedas.

Indra showed Bharadwaj a mountain, and then gave Bharadwaj three fistfuls of soil from the mountain saying, “The mountain embodies the Vedas. In each lifetime you gathered knowledge as much as in this fistful of soil.” Thus Bharadwaj was told that the Vedas are infinite and that it would take infinite lifetimes to know all that there was in the Vedas, for they contained all that there was to know in the world. Indra told the sage that he should be satisfied with the Vedas he has read, which are adequate to help human beings live a fulfilled life. Bharadwaj took this lesson with humility.

Now, there are several ideas that emerge from this story. One is that the idea of rebirth already existed, as did the idea of freedom from cycle of rebirths, for Bharadwaj is offered the same at the end of three lifetimes. Indra in this story is very different from the warrior Indra of the earlier Vedas and the entitled Indra of the later Puranas. He seems like a wise god, linked to wisdom, a role later taken up by Shiva and Vishnu.

Most importantly, we realise that ancient Indians were aware of the concept of infinite (ananta) wisdom of the celestial realms. In our finite lifetimes, we can only get access to finite wisdom. Our knowledge of the limitless universe will always be limited. This is why Hindus do not have the concept of ‘the’ truth, but the concept of ‘entire’ truth (param-satya). Unlike Western thought, in which truth is absolute and qualitative, Indian thought is far more quantitative. We know something, but we will never know everything. Since we will never get access to infinity, we must always be humble.

Through stories of the mountain of Vedas and the blinking gods, Hindus were made aware of the scale of the universe and its wisdom, very different from the finite, closed word of ancient Greeks, inherited by the church, that was shattered in Europe only 500 years ago with the advent of science.